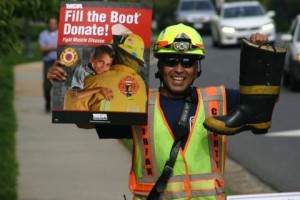 Fairfax County Fire Rescue personnel will be out on the streets in Reston and the rest of Fairfax County this weekend as part of the annual Fill The Boot campaign. The fundraiser benefits the Greater Washington Muscular Dystrophy Association.

Fairfax County has been taking part in the fundraiser for 30 years, and for the pst eight has consistently finished among the top three in the nation for amount collected during the weekend campaign. Fairfax has frequently topped  such large cities as Houston and Los Angeles.

Firefighters will be out with the boots from Friday to Monday at controlled intersections all over Fairfax County and the Town of Clifton.

Proceeds raised during the  campaign help support MDA services and research programs in the Washington, D.C. area, including MDA’s annual camp for kids affected by neuromuscular disease and outpatient clinics for people with more than 40 neuromuscular diseases at Children’s National Medical Center and Georgetown University Hospital.