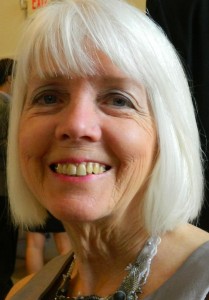 Reston residents Pat and Steve Macintyre, who have deep roots in various Reston-area arts organizations, will be honored next month by the Arts Council of Fairfax County (ACFC).

The Macintyres will be awarded the 2014 Arts Philanthropy Award for their “tireless support and public service to community arts during the past three decades,“ the council says.

Pat Macintyre has been a key figure in Reston art circles for nearly as long as Reston has been around.

Pat was a student at the Corcoran College of Art & Design in 1968, when Rev. Embry Rucker asked if she would organize art shows Common Ground, a coffeehouse/community center located at Lake Anne Village Center. By the time she briefly moved away in the mid-1970s, she had helped form the League of Reston Artists.

The Macintyres returned in 1977 and found a still-vibrant art scene here. In 1986, Pat became the owner and director of Reston Art Gallery & Studios (RAGS), a cooperative of 11 professional artists located at Lake Anne Plaza.

Pat is also committed to teaching children a love for art. She leads free Children’s Art Workshops every Saturday morning at RAGS, as well as classes at Reston Children’s Center.

“We were surprised and honored to be recognized,” Pat Macintyre said in a release. “The arts are part of our lives.”

The Arts Council says the Macintyres earned the award because they have supported organizations such as the Council for the Arts of Herndon, Herndon Foundation for the Cultural Arts, League of Reston Artists, and Initiative for Public Art Reston. They have helped grow a thriving local arts community, providing enriching experiences for residents in Herndon and Reston.

The Macintyres support arts programming such as Art In Public Places and the Technology and the Arts Scholarships in Herndon.

The Macintyres will receive the honor at the annual ACFC Awards at the Fairview Park Marriott on Friday, Oct. 24.