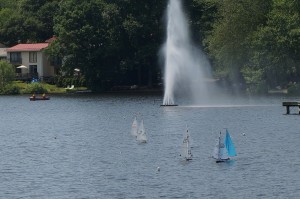 The 343 Lake Anne homes that are bound by the Reston deed to use RELAC, the aging air-conditioning system, may be closer to getting released from the mandate.

The Reston Association Board will make a decision this week on accepting the petition of RELAC users and going forward with a referendum on the issue.

The referendum would need two-thirds of RELAC townhouse users to vote in favor in order to pass.

The petition was signed by 121 residents, many of whom have been working on getting a release from RELAC since last winter.

RELAC — which stands for Reston Lake Anne Air Conditioning Corporation — was put in place in some of Reston’s first homes when they were built in the mid-1960s. The system uses Lake Anne water to provide cooling. Touted as state-of-the-art and quiet when it was installed, many homeowners have been complaining for years about its expense and inefficiency.

“Our goal is to make it so people have a choice,” John Hunter, the Washington Plaza Cluster resident who spearheaded the petition effort, said last winter. “If they are happy with RELAC, great. If not happy, then they can get off of it.”

Hunter, who has lived in his home about four years, said he has used the medical exemption to get off of RELAC. He said the system could not reach the third floor of his townhome, where it was routinely 80 degrees in summer. He said he installed an electric heat pump at a cost of more than $6,000, but has heard of others paying as little at $4,000 for a new HVAC. He will still have to put the RELAC ductwork back in place when he sells the house, he said.

Hunter previously said rates vary greatly from home to home. His bill, before he installed the heat pump, was $1,500 for the season. He said homeowners are paying more than 50 percent than they did a few years ago.

Ballots would be mailed in early January, with a Jan. 30 voting deadline.