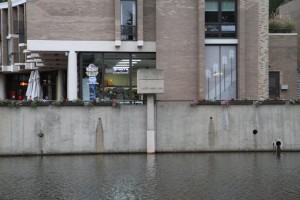 Many Lake Anne-area residents voiced their disapproval Thursday over potential new rules that would make it harder to opt out of the aging air conditioning system that serves their neighborhood.

RELAC (Reston Lake Anne Air Conditioning Corporation)  has been the cooling system for about 300 Lake Anne-area homes since the mid-1960s. The system is powered by recirculated lake water from Lake Anne. Touted as state-of-the-art when it was built, nearly 50 years later it is oft-criticized by users for being inefficient and mold-producing.

Reston Association was slated to discuss an updated amendment to the RELAC agreement at its meeting on Thursday. RA president Ken Knueven says the amendment “tightens up language” of an existing rule that residents showing a medical reason can opt to install a supplementary cooling system.

The board heard testimony from about 10 RELAC customers. They expressed varying degrees of dissatisfaction — both with the system and with the amendments that would enforce them to be designated as “handicapped” in order to get a medical exemption from the system.

“I am strongly opposed to this amendment and the last one that was made [this year] with very little public consultation,” said Mike Pritchard, a member of the board of Washington Plaza Cluster.

One of Pritchard’s concerns: the medical waiver is temporary and must be reapplied for every year.

“Previously if you moved, the waiver would be null,” he said.  “Now the condition is if RELAC provided adequate service, waiver is nullified. That seems extremely unfair.”

Pritchard and others who spoke also have concerns about having to show medical records to a homeowner’s association.

“I have serious concerns about storage of medical record,” he said. “This would mean we would be required to submit personal and private medical information to RA. RA would have to ensure this info is encrypted, secure, and meets regulations. That will cost RA money. Who will this info will be shared with? Will RA be hiring an M.D. to review medical records to make sure they are valid?”

Added Maple Ridge resident Jeff Ashley:  “I still question use of handicapped and qualification of handicapped, even the use of disability. I have concerns over whole document. This becomes a question of indoor air quality and health and safety. As homeowners, we have the right to manage this. I have been [a RELAC customer] almost nine years without much resolution. I pay quite a bit; it has gone up 73 percent in nine years. It is a financial burden and not providing added value to my health.”

The RA board, originally scheduled to vote on the amendment, first changed it to discussion a the start of the meeting. But they really did not discuss it much. Instead, they decided to review member testimony and emails and have further community discussions before bringing the issue back early in 2014.

“What does handicapped mean in this context?” said South Lakes director Richard Chew. “We need to take some steps to clarify.”

Because use of RELAC is in the original RA covenants, it is very hard to completely change it, said RA attorney Ken Chadwick. One way to work around it is under federal fair housing laws, which state one must provide accommodations for “handicapped.”

The community needs clarification on that issue, said Lake Anne director Eve Thompson, who is also a Realtor.

“We look like we are pro business,” she said. “But there is the issue we have this system that is kind of aging out. That may not be our thing to struggle with, but it going to be have to struggled with eventually.”