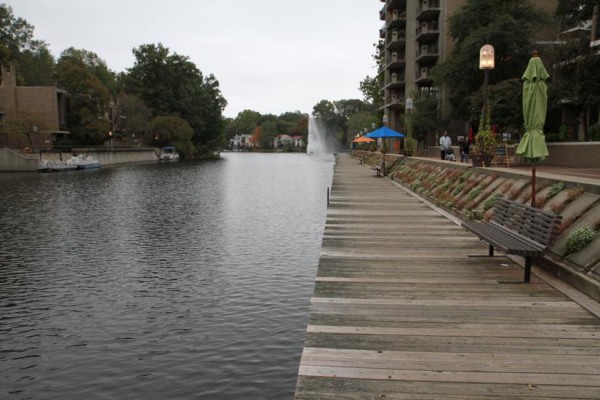 A group of Reston residents who are customers of RELAC, the air conditioning system that is powered by recirculated water  from Lake Anne, are organizing to start a referendum process that would give them more freedom of choice in the matter.

About 300 Lake Anne-area homes are on the RELAC (Reston Lake Anne Air Conditioning Corporation)  system, which has been in place since the mid-1960s.

Reston Association has been discussing an amendment to the Reston covenants declaring that a person who is asking for an exemption from using the aging air conditioning system must show a doctor’s order advising of the “handicap,” information about the handicap (such as medical records), and that order must be updated annually. That rule tightens up the current exemption, in which a medical reason is good for as long as the homeowner lives in the house.

Currently, the RA covenant binds RELAC homes to using the system. Washington Plaza Cluster resident John Hunter says the time may be right for a referendum to alter the covenant.

“We’ve decided to get the process going again,” said Hunter. “Our goal is to make it so people have a choice. If they are happy with RELAC, great. If not happy, then they can get off of it.”

Hunter, who has lived in his home about three and a half years, used the medical exemption to get off of RELAC. He said the system could not reach the third floor of his townhome, where it was routinely 80 degrees in summer. He said he installed an electric heat pump at a cost of more than $6,000. He will still have to put the RELAC ductwork back in place when he sells the house, he said.

Because it was quiet and saved energy, RELAC was considered innovative in the 1960s. But as other technology improved, it became clear the system had many faults, many Lake Anne residents say.

The cost has also risen significantly in recent years. Hunter said rates vary greatly from home to home. His bill, before he installed the heat pump, was $1,500 for the season. He said some homeowners are paying more than 50 percent than they did a few years ago.

To get a change in the covenants, interested RELAC users would have to petition the RA Board of Directors. The board would then pay for a referendum of all RELAC customers. The vote would have to be a two-thirds majority in order for the board to consider the change.

RA President Ken Knueven says “as a RELAC user I am satisfied with it — but also sensitive to those who aren’t.”

“Members have every right to [try to] change bylaws anytime they want,” he said. “We would be happy to make sure they get that process.”

The board is slated to discuss RELAC at its Feb. 27 meeting.