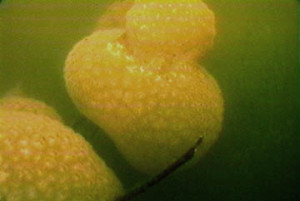 “They are actually pretty cool wonders of nature,” said Claudia Thompson-Deahl. “They only live in clean water, so that’s a real plus.”

Bryozoa have been around since the upper Cambrian (500,000,000 years ago) era and are very similar in composition to coral, scientists say.

The Bryoza serve as filters of various micro-organisms in the lakes. They have existed in Reston waters for many years, according to Thompson-Deahl. Most moss animals form in spring and die in winter.

Thompson-Deahl says questions were recently raised about what the “mystery objects” were and suggested that they should be eliminated. However, RA staff said that while Bryozoa can be considered a nuisance in certain environments, they have never caused any problems in Reston lakes and are beneficial to the local environment.

Learn more about Bryozoa on this info page from the University of Massachusetts.