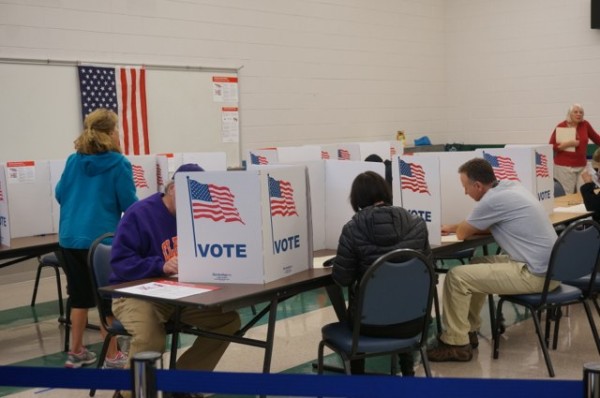 Fairfax County voters went to the polls at a slow but steady pace on Tuesday.

Polling place officials said it seemed to be a typical turnout for a sunny day in a midterm election year.

Up for vote in Reston: U.S. Senator; U.S. House of Representatives VA 11th; a Constitutional Amendment for spouses of veterans killed in action; and a $100 million Fairfax County transportation bond. Have not voted yet? Get up to speed on candidates and issues with our Reston Voter’s Guide.

As of about 10:45 a.m., 850 out of 4,600 registered voters had voted at South Lakes High School, Reston’s largest precinct, said poll supervisor Ed Robichaud. He said the South Lakes precinct had already had 200 early voters as well.

At the Cameron Glen polling place, 436 had cast votes by mid-morning, officials said. That’s about 11.6 percent of registered voters and a typical pace for a non-Presidential year, they added.

In 2010, for example, the last midterm that was a also a presidential race, the national voter turnout was 36.9 percent, says the Pew Research Center. Turnout rebounded to 53.7 nationally for the 2012 Presidential Election. Turnout is usually shy of 50 percent in Fairfax County during non-Presidential years, county statistics show.

Fairfax County said morning turnout on Tuesday was averaging between 10 and 20 percent.

Incumbent Sen. Mark Warner (D) cast his ballot Tuesday at Lyles-Crouch Traditional Academy in Alexandria. While Warner, seeking his second term, has been leading in all major polls, the margin Warner holds over Republican National Committee chair Ed Gillespie has been narrowing in recent weeks.

The Senate race is important because 13 states have tight races, and a few Republican victories can earn the party control of the Senate. Read more about tipping Senate control in The Washington Post.

The polls will be open until 7 p.m.

Reston Now will bring you full results when they are available.