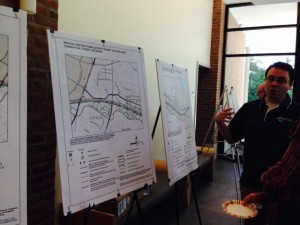 This meeting, third in series of discussions with Fairfax County planners this fall, will concentrate on the Baron Cameron retail area; pedestrian circulation and safety; Reston’s Village Center and Community Spaces; and Tall Oaks Village Center.

Phase I of the new Master Plan was approved by the Fairfax County Board of Supervisors earlier this year. That portion lays the framework for development and density around Reston’s transit stations.

Fairfax County officials say the the current comprehensive plan, last updated in 1989, requires revision because Reston no longer has a master developer to update the plan for Reston; the plan for Reston has outdated elements; and population expected to grow with the arrival of Metro.

Phase II of the Master Plan, which will guide residential neighborhood and village center redevelopment, kicked off in June. After accepting public feedback during the summer, planners wrote a working draft “strawman text.”

The strawman text was presented to the community at a meeting on Sept. 13. There was a second community meeting Oct. 18, where residents discussed the pros and cons of the existing village centers. and convenience centers. The future of the largely empty Tall Oaks Village Center emerged as a universal concern.

The Baron Cameron retail area — which contains Home Depot — presents its own challenges. The 22-acre parcel was originally planned to be part of Reston Town Center, but was never developed to the same scale or design as town center or the nearby Spectrum.

However, with the Spectrum slated for a massive mixed-use overhaul, the Master Plan should address the future of Baron Cameron shopping center, which has a variety of stores, many of them locally owned.

“This area continues to serve as an important location for community serving retail and is
planned for retail uses at 0.25 FAR to maintain its existing character,” the working draft states. That density number is the same as the other village centers.

“Opportunities should be sought to improve pedestrian connectivity within the retail center and improve connectivity more broadly to the surrounding neighborhoods and neighboring commercial areas for all modes of transport including pedestrian, bicycle, transit and vehicles. In addition, if existing buildings are redeveloped with new retail buildings, the planning and design of the redeveloped sites should provide for environmental sustainability, green technology, and an appropriate transition to the surrounding neighborhoods.”