With gas prices at the lowest they have been since 2010, the American Automobile Association is expecting more than 1 million Washington-area residents to travel more than 50 miles over Thanksgiving 2014. 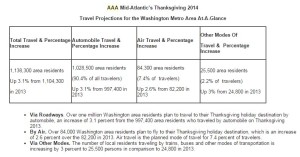 “Let’s put the magnitude of the Thanksgiving holiday exodus into perspective. Nearly one out of five area residents (19 percent) will be traveling away from the region this Thanksgiving.”

Since 90 percent of Thanksgiving travelers will travel by car, it will cost less to drive than in recent years, says Anderson. Gas is averaging under $3 a gallon for the first time since Dec. 22, 2010, says AAA.  The national average for gas is $2.86 a gallon.

Gas prices in Reston range from $2.95 a gallon at the Exxon at Wiehle Avenue and Isaac Newton Square to $2.99 at the Exxon at Glade and Colts Neck, according to Gasbuddy.com.

If you are hitting the road, when is the best time to leave? A recent Washington Post Dr. Gridlock story says roads here may see a holiday travel impact as early as this Sunday.

Thomson cites a study by INRIX, a traffic analysis firm:

Looking at the data on the D.C. area’s traffic for November 2012, the most recent Thanksgiving period for which sufficient information was available, the researchers found that holiday travel has some impact as early as the Sunday before Thanksgiving, and that the impact continues till the Monday afterward.

But the most difficult getaways were  Monday, Tuesday and Wednesday afternoon. The traffic build-up starts early each afternoon, compared to other weeks that fall.

You can also visit this graphic to see how typical Washington-area Wednesday evening traffic compares to Thanksgiving Eve traffic.