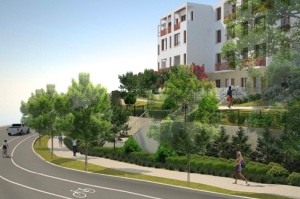 The Fairfax County Board of Supervisors has approved changes to the comprehensive plan for redevelopment at Reston’s Lake Anne.

The changes, which mostly look at densities and add continuity to the six separate Land Bays comprising the comprehensive plan.

The changes approved by the supervisors at their Tuesday meeting mainly consider densities within the various “Land Bays’ — the areas in and around Lake Anne Plaza and nearby Crescent Apartments. The interior of Lake Anne Plaza is a designated historic district and is not a part of the redevelopment, though nearby sections of the current parking lot and several buildings not connected to the interior are included.

Lake Anne Development Partners (LADP) was selected in 2013 after a Request for Proposals by the county to develop the project. The company says the changes only modify some of the density around within the various Land Units to be consistent with the design as it has evolved during the pre-planning process, but it does not actually represent any material change in the overall densities or intent of the original Comprehensive Plan Amendment for Lake Anne Village Center that was initiated in 2007 and approved in March 2009.

Construction is expected to begin in 2015, LADP has said.