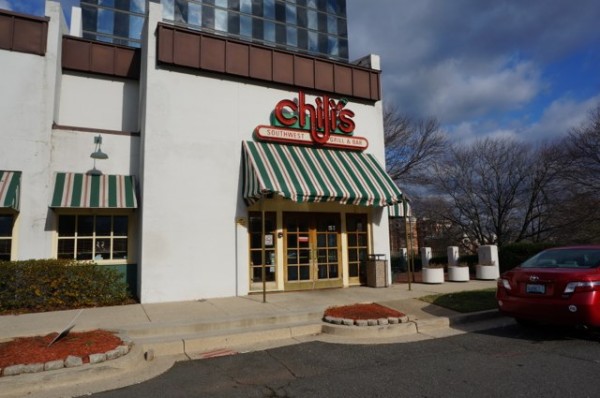 Chili’s has been located at 11840 Sunrise Valley for nearly two decades. Mike Huffman, director of operations for Chesapeake Restaurants, Chili’s parent company, said there  is not yet an exact closing date.

“We are on a very short time frame,” he said “I think from our best understanding, it will be this spring.”

The International Center area, where Chili’s is located, is slated for major redevelopment.

In summer 2013, the Fairfax County Board of Supervisors approved a mixed-use plan for the 10-acre site that current is a surface parking lot, a small strip mall, the stand-alone Chili’s, and office space.

Developer JBG’s plans call for a 15-story addition to the Reston International Center and four new buildings: a six-story residential building, a 15-story residential building, a five-story building that incorporates a parking garage with residences and retail space; and a 10-story building that mixes office space, parking and retail space.

JBG first had a plan for the area approved by the Board of Supervisors in 2008. That plan featured 498 residential units, 245,000 square feet of retail and nearly 430,000 square feet of office in six buildings. In the newer plans, the numbers are similar, but the design has changed to better engage with the surrounding environment.

There will be an entrance to the development from the Reston Parkway side, something the area currently lacks.

In a presentation to the Reston Association Design Review Board in 2013, Cunningham Quill Architects and Olin, a landscape architecture firm, said they were seeking a design that engages with the landscape and connects with the Wiehle-Reston East Metro station via bike and foot paths.

The new plans will also be harmonious with the adjacent Reston Heights project, also built by JBG. That includes the Westin Reston Heights hotel and the Mercer Condominium, as well as office space.

A Wells Fargo branch in the same development closed in August and sits empty as the center gets ready for the development. Under the current plans, only the stand-alone Popeye’s restaurant will be incorporated in the redevelopment.

JBG has not said when construction will start on the new development.