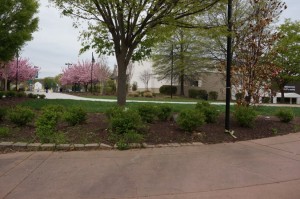 A plan to provide extra lighting on the Reston Association paths near Hunters Woods Village Center is going to cost much more than originally anticipated, RA CEO Cate Fulkerson says.

RA has been talking about adding additional lighting on the paths for more than a year in the hopes that it would deter loitering, graffiti and crime. The association budgeted about $125,000 for the project.

However, the lighting has not been installed after new estimates show RA’s portion would be closer to $190,000, according to RA’s carryover budget for 2015.

Fulkerson said that RA is hoping Edens, the owners of the village center, would help share the new and hefty cost.

“The actual total cost is closer to $300,000,” Fulkerson said in an email. “We have not installed pathway lighting in many years, and the original estimate used in building the 2014/2015 Capital Budgets did not account for expenses related to Dominion Power’s engineering and equipment costs, which have increased considerably since the last time the Association installed pathways lighting.”

Fulkerson said RA is working on several ways to offset the costs.

“We continue to work with Edens to obtain their support in covering the costs associated with the installation,” she said. “In addition, we are exploring available grant opportunities to assist with or offset the cost.”

The $124,916 set aside for the project will carry over into next year. In total, RA will carryover $961,830 for the Hunters Woods lighting project, as well as a Fannie Mae pathway extension, Twin Branches connector and the South Lakes pathway connector. RA says the latter are in varying stages of completion.