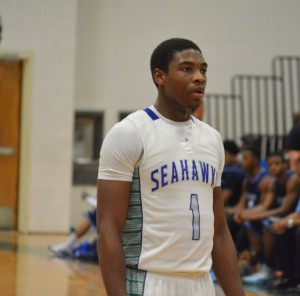 South Lakes boys basketball will be without leading scorer Brandon Kamga for the next month as the senior chipped a bone in his ankle last week.

Kamga, who was averaging 23.8 point per game for the Seahawks, went up for a layup and landed on another player’s foot during a victory over Jefferson last week, said coach Andrew Duggan. Kamga is in a boot cast.

“We expect him to be back in about four weeks and ready to rock,” said Duggan. “Unfortunately, these things happen.”

Kamga was the Northern Region 5A boys Player of the Year last Year. He has signed to play with Northeastern University next year.

Even though they were without Kamga as well as sophomore Marcus Cherry (injured knee) on Friday, South Lakes still defeated Herndon 64-59. Senior Zach Pearl scored 22 points in the victory. The team had not beaten crosstown rival Herndon since 2011.

The Seahawks are now 6-1 and ranked No. 15 by The Washington Post. It is the best start in Duggan’s five years at the school.

Duggan says he is impressed with the depth of this year’s team and there are a number of kids who can step in to make up for Kamga’s loss.

The Herndon game was a great example, he said.

“Zach [Pearl] is our second-leading scorer, and he really stepped up,” said Duggan. “Grant Chustz can get to the basket the way Brandon does. He had 12 against Herndon.

The Seahawks will need the rest of the team to be healthy as they take on No. 3 National Christian (8-1) in the first round of the Wakefield Holiday Tournament on Friday.