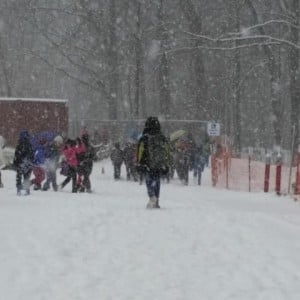 After students in teacher Evan Millar’s fifth-grade class at Terraset Elementary School made it into the building Tuesday, they learned a lesson in effective communication.

Forget #CLOSEFCPS, which was briefly trending on Twitter as about four inches of snow fell outside. Fairfax County Public Schools was widely criticized for its decision to start school on time despite the snow. FCPS admitted by Tuesday afternoon that they made the wrong call.

Here are a few examples of the fifth-graders’ work:

Today it was a snowy and freezing day. I had a rough time getting to school. I think you shouldn’t have opened school today.

You are kind of in charge of the buses because if school were closed, the buses wouldn’t have come. The cars were slipping and sliding everywhere because of the snow and ice. It was very slippery outside. I fell when I was just walking and I fell on concrete.

I get how you had a very difficult decision to open school or close school. You didn’t have a lot of time to decide. However, people could have gotten hurt or broken something.

Thankfully, I didn’t see anyone, but someone somewhere maybe did.

In conclusion all my reasons say that you should have closed school today (said in a judgy tone).

Your decision to make Fairfax children go to school today was scandalous. Making kids stand out in the cold like that, mmmm, what would your mother say? That’s just somber!

I believe that you could have made a better choice and let us stay home. We could have been killed because of those sliding cars. The bus stop was going crazy because two cars almost hit each other at the intersection near Soapstone Drive.

Like I said, your decision today was menacing because at my bus stop we were standing there for almost an hour. Many kids, including my sister, were freezing. Also your choice was inconsiderate of other people, mainly the teachers. Who wants to work in almost three inches of snow, and deal with their crazy students at the same time?

I know your decision was based on the time the storm was coming, but I hope you take more consideration next time.

It has been a very hard day. It is a cold day and it was very hard to get out of bed. There was just too much snow for you not to cancel school.

I think it is much too dangerous to go to school and this is why. It is very slippery and it is a hazard for cars to drive. I saw two car crashes and I saw a number of people fall and hurt themselves, including me.

I know it was a hard choice to make and that you had very little time. But you should have thought about all the kids that would get hurt. The snow plows would have a very hard time plowing the streets because there are so many more cars on the road. So please think about the kids next time you make a choice like this.

Today was a rough day to get to school. Because of the snow, our bus was so late that half the people went home. I thought it was dangerous.

I think school should have closed today. Our teacher and principal told us we have full Mondays so that we can have days off of school when it’s a heavy snow day. Well, we had a heavy snow day today.

When my friend Kylia came to pick me up this morning she told us the bus might be late. Well, it was late by almost an hour. Half of the people left and stayed home.

When I walked outside, I saw how thick the snow was. It was like a million gallons of white powder. I thought it was dangerous. We saw a car slipping and spinning in a circle. Also, a little girl was crying because it was too cold outside and she couldn’t feel her feet.
It was terrible and freezing cold. My feet felt really numb. I know it was a last minute choice to pick if school should have been open, but next time please think about what happened today.

It was dangerous because there were cars crashing and stuck in snow. My friend and his dad had to push their car up a hill.

It was hard walking to school because the snow was falling and the trees had snow on the branches. Whenever the wind blew, it knocked the branches to the side and made the branches move. The snow went on the path and kept building up. It ended up being a lot of snow that built up. It ended up taking a long time to get to school.

I understand that it was a hard decision and that you had to make the decision early in the morning. It also wasn’t snowing as much either and there wasn’t as much snow on the ground. The news did predict the snow, however.

But think what could happen if one car slipped out of control and made all of the other cars crash and then there were a ton of crashes? Then if a walker passed by and hit a walker and killed them? Even though that wouldn’t probably happen it is a possibility that it could happen. Those are my reasons that we shouldn’t have had school today.