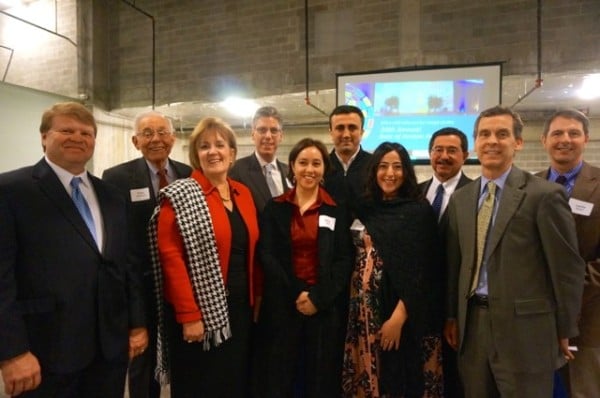 The Greater Reston Chamber of Commerce and Cornerstones announced the 2015 Best of Reston honorees — as well as new co-chairs of this year’s event  — at Comstock’s Reston Station Thursday night.

The honorees represent individuals and businesses who have given back to the community. They will be honored at a gala benefitting Cornerstones on April 30.

The last two Best of Reston galas raised a combined $1,178,000. That money enabled Cornerstones to double its stock of affordable housing in our community, said Jill Norcross, Chairman of Cornerstones’ Board of Directors.

“As a leading developer in Reston, Comstock takes its responsibility of building a strong community very seriously,” said Maggie Parker, Comstock’s Director of Communications and Public Outreach. “A community is more than its stations, roads and buildings; it is made up of the people who come from all walks of life. It’s an honor to be asked to
raise money for this incredible community resource.”

Parker also announced that the Best of Reston has already raised $325,000 — 65 percent of this year’s goal — from Reston businesses and individuals.

Butler, Reston Association’s Senior Director of Parks and Recreation, has used his passion for the outdoors in volunteer work that includes the Reston Triathlon, the Reston Sprint Triathlon and the Reston Kids Triathlon. The latter event offers scholarships to 50 kids in need to get involved in the sport.

“His can-do attitude, insight and advice, and leadership in making connections across the community create the added value in every event or activity in which Larry is involved,” the Best of Reston committee said.

Steinbauer is an original Restonian, serving as founder Bob Simon’s civil engineer in the planning of the community more than 50 years ago. He has served on the board of Reston Association, Cornerstones, Greater Reston Chamber of Commerce and the former Reston Homeowners Association.

“His home is Reston and he has put his heart into it,” Best of Reston organizers said.

New science and tech corporation Leidos opened its headquarters at Reston Town Center less than two years ago, but has quickly become immersed in the community, working with the American Cancer Society’s Relay for Life; the American Heart Association’s Run Your Heart Out, Reston; Habitat for Humanity; Greater Reston Arts Center and Initiative for Public Art Reston, among others.

Maximus’ corporate headquarters is in Reston, where it supports Herndon-Reston FISH’s work to help those in need, FACETS, The Women’s Center and the Washington Redskins Foundation, among others.

Lois and Troy Hughes founded this nonprofit ministry that helps people work their way out of homelessness and grow self-esteem in newly furnished homes. His Hidden Treasures helps transform transitional housing into personalized homes, with restored and donated furniture, as well as brand-new beds for clients.

This native Restonian is a business leader with Veatch Commercial Real Estate who also gives back in a variety of capacities, helping Cornerstones, Leadership Fairfax, his church, and youth sports teams.

“Most importantly, Casey inspires and models to others how finding your passions and connecting them to your capabilities can move mountains,” the Best of Reston organizers said.

Tickets and sponsorship information will be available soon on Cornerstones’ website.