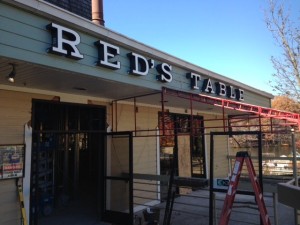 The restaurant, located in the former Lakeside Inn space, is an ambitious offering from Ryan, Pat and Matt Tracy, who grew up in Reston. The brothers own several Five Guys franchises, but this will be their first foray into sit-down dining.

Crews have been busy for months knocking the Lakeside Inn space down to the studs to renovate the Red’s Table space.

According to a craigslist help wanted ad, the Tracys have hired chef Adam Stein to oversee the kitchen. Stein formerly worked at D.C.’s The Queen Vic and at Alexandria’s Light Horse Tavern, which is owned by the Tracys’ cousin.

The posting also said the restaurant is hoping for a mid-March opening. Ryan Tracy had said last fall that he hoped to open in late January or early February.

But the owners still have big plans for good food and drinks at the new Reston spot. If the help wanted ad is any indication, expect excellent baked goods, sustainable fish, tattoos and a laid-back atmosphere:

Red’s Table is hiring for one Kick-Ass Baker/Pastry Chef to oversee our bread program and desserts. Savory experience is a plus, as this person will function in a hybrid position of AM Sous as well. (Mostly receiving and opening the doors for staff.) Five days a week with two consecutive days off. Tattoos and piercings are a bonus, but not required. We are hoping to open in the later half of March and are looking for people to help build our team. We will be open for Lunch and Dinner as well as Brunch on the weekends. Red’s will be a scratch kitchen paying close attention to region and seasonality. We will have our own bread program as well as a range of scratch pies and cakes. Focus will be on our large raw bar offerings as well as sustainable finfish and local proteins.

Chef Adam Stein is looking for strong, self-starters with experience who either wants to take a step up or are looking for a change of pace. No yellers, screamers, or plate throwers need apply. A warm, family atmosphere is the aim. If you’re looking for a serious, but relaxed, atmosphere to contribute to a hard working team, then please submit a Brief Cover Letter and Resume to Chef Adam Stein at the email above. Thanks!