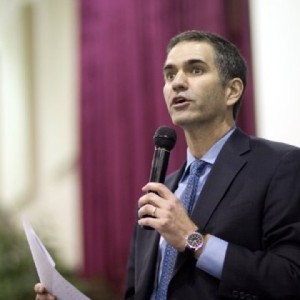 The awards program, now in its 12th year, was instituted to recognize sustained contributions by public sector employees, non-profits, or appointees to a public board, authority or commission.

Klein was selected for the award by Leadership Fairfax because he has “generously and tirelessly dedicated his time, energy and extensive talents to support people in need of shelter and affordable housing in Fairfax County,” Leadership Fairfax said.

“I am so honored to be selected for such an amazing honor and award,” said Klein. “I am thrilled to see the progress we have made as a community in preventing and ending homeless, which has only been possible with the tremendous commitment by government,nonprofits, businesses and faith communities all working together. “

Klein was appointed by the Fairfax County Board of Supervisors to his current position in 2009, after serving in leadership roles at the Freddie Mac Foundation and non-profit organizations in both Arlington and Fairfax Counties.

In his role at OPEH, Mr. Klein coordinates with a governing board, a consumer advisory council, the non-profit community, and the new Fairfax-Falls Church Community Partnership in overseeing the 10-year county plan to prevent and end homelessness.

“Dean Klein has worked with the faith community, local and state governments, and businesses to support those in need as they have sought to overcome the challenges of homelessness, poverty, illness, isolation and crisis,” Rodney Lusk, chair of Leadership Fairfax’s selection committee, said in a statement. “One of his many accomplishments has been to increase the number of individuals moving out of emergency shelters to permanent housing. He grew this number from 243 in 2010 to 926 individuals in 2014.”

Last year, Klein was recognized with Fairfax County’s highest honor, the A. Heath Onthank Award. He holds degrees from The Ohio State University and Howard University, and is a graduate of Leadership Fairfax, Leadership Greater Washington and Leadership Arlington.

Klein lives in Reston with his wife, Jill, and his son and daughter.

Klein will be honored at the Board of Supervisors Breakfast at the Fairview Park Marriott on March 13. The event is from 7:30 to 10 a.m.