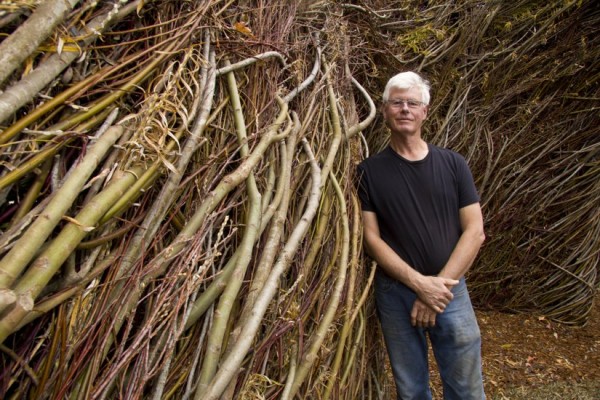 The story of Patrick Dougherty, the environmental artist who will produce a large-scale artwork at Reston Town Center next month, will be presented in a free film showing at Reston Community Center’s CenterStage Tuesday at 7:30 p.m.

Dougherty uses natural materials such as branches and saplings to create large installations. Initiative for Public Art Reston (IPAR) received a $20,000 National Endowment for the Arts ArtWorks Grant to help support the project.

Willowsford, a Loudoun residential development, is also giving $30,000 as well as materials to the project, which will remain in Town Square Park for one to two years.

The movie, Bending Sticks: The Sculpture of Patrick Dougherty is a feature-length documentary that celebrates Dougherty’s 25- year career.

The film follows a year in Dougherty’s career and the creation of five Dougherty commissions in different locations — inside the new wing of the North Carolina Museum of Art, on Main Street in Rock Hill, SC, at a private home in Chapel Hill, NC, at the Bascom Art Center in the mountains of NC, and in the gardens of Dumbarton Oaks in Washington, DC. At each location, viewers will see how Dougherty and many others transform piles of sticks into energetic lines and exuberant forms.