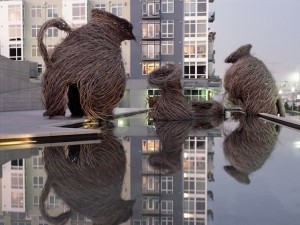 The Initiative for Public Art Reston (IPAR) announced on Tuesday that it is among 919 nonprofit organizations nationwide to receive a National Endowment for the Arts’ (NEA) Art Works grant.

IPAR has been recommended for a $20,000 grant to support the creation of a temporary, site-specific, large-scale public art work in Reston by artist Patrick Dougherty.

IPAR, in collaboration with the Greater Reston Arts Center (GRACE), will commission Dougherty to create a public art work in Reston Town Square Park in Reston Town Center over a three-week period in April 2015.

The project will feature local saplings and will involve local artists, youth, and other community members, GRACE and IPAR officials said.

“We are thrilled by this significant support for the Dougherty project and its related programming,”said IPAR Executive Director Anne Delaney.  “The NEA Art Works grant will enable the Initiative for Public Art Reston to realize this major temporary art installation. IPAR is delighted to collaborate with GRACE and other Reston organizations in a public art project that will engage the community at-large.”

“The project reflects the spirit of the Public Art Master Plan for Reston, which encourages working with other community organizations to commission public art projects that energize public places and engage the community,” she added.”

Art Works grants support the creation of art, public engagement with art, lifelong learning in the arts, and enhancement of the livability of communities through the arts, according to the NEA. The NEA received 1,474 eligible applications under the Art Works category, requesting more than $75 million in funding. Of those applications, 919 are recommended for grants for a total of $26.6 million.

For a complete listing of projects recommended for Art Works grant support, visit the NEA website. For more examples of Dougherty’s work, visit his website.