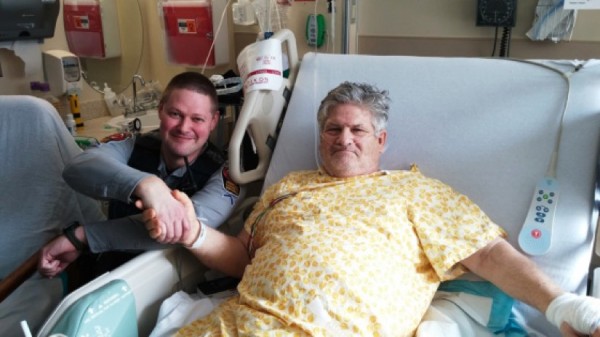 A dog named Sassy and an officer from Fairfax County Police’s Reston District Station were hailed as heroes by FCPD on Tuesday for saving the life of a Great Falls man earlier this month.

During the eight-inch snowstorm in the area the first week of March, Jim Cassell appeared to be napping in his recliner at his Great Falls home. Sassy, his English Setter-Border Collie mix, sensed something was wrong and barked excitedly near his owner’s chair. 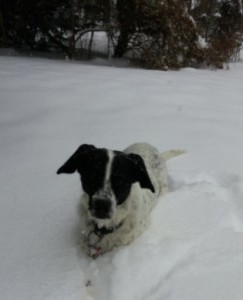 Reston District Officer Nathan Keysor was the first emergency responder on the scene, police said. He recognized Cassell had no pulse and wasn’t breathing. He took over for Susan Cassell, administering chest compressions and succeeded in getting Jim Cassell breathing again.

The Fairfax County Fire & Rescue Department team arrived, took over, and served as the next link in the “chain of survival” to help save Jim Cassell.

He was rushed to Reston Hospital Center, where he remained in a coma for eight days.

Keysor’s family and police and fire colleagues, along with Susan Cassell, were there to support and congratulate him. Jim Cassell remains hospitalized and will head to a rehabilitation facility soon. He expected to recover.

“Any of my colleagues and fellow officers would have done the same thing I did,” said Keysor, “I was in the right place at the right time.”

More Stories
Op-Ed: Speculating With a Credit CardReston Pet of the Week: Goomba