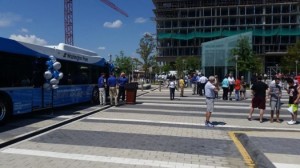 The farmers market was formerly held in the office complex parking lot at Sunrise Valley and Reston Parkway (and prior to that, across Reston Parkway in another office park).

The market, which is open 3 to 7 p.m. on Wednesdays, hopes to serve both Metro commuters and shoppers arriving by car (or bike or foot) at the plaza adjacent to the Wiehle-Reston East Metro.

Here is what you need to know if you go:

If you park in the ParkX garage at Reston Station Boulevard and Wiehle Avenue, parking will be $1 (and not $4.85 like it is for daily commuters).

If you park in ParkX, take the elevator or escalator up to the plaza. If walking, you can access the plaza via the stair on Reston Station Blvd.

Maggie Parker, spokeswoman for plaza owner Comstock, says Comstock is looking for collapsible carts that shoppers can take to their cars. Stay tuned for that upcoming addition.

Fresh Foodie (prepared foods such as salads, smoothies and snacks)