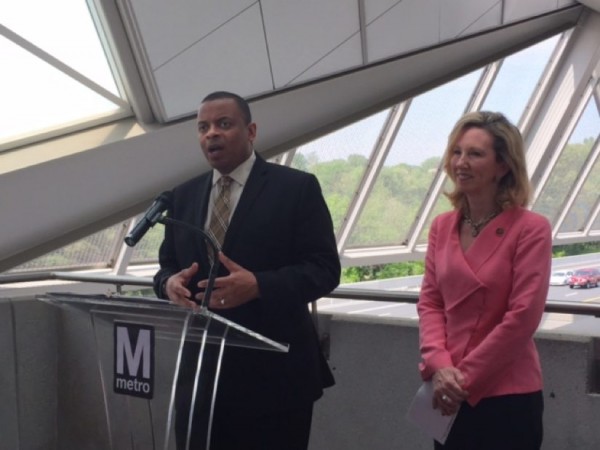 The officials held a news conference in the Metro station to stress the need for continued federal investment in public transportation to ensure safety and reliable service for Metro riders.

“There is no scenario where we can cut funding and expect our transit system to meet the needs of a growing country,” said Foxx. “It belies math, belies physics and the growing demographics of our growing country.”

“Cutting the funding that we need to grow america’s transit systems can slow down the pace of Metrorail repairs that are supposed to enhance safety,” he added. “Cutting funding for WMATA, as has been proposed, would disrupt the phasing in of more than 500 new rail cars that are on the books to come online.”

The cuts, announced last month, will reduce federal funding to the Metropolitan Area Transit Authority by half in 2016.

The federal government usually provides about $150 million annually to Metro. A $55 billion funding bill will reduce funding to $75 million.

“We have had a bipartisan consensus,” said Comstock. “We are very united in making sure the money for Metro is restored, that Metro gets the $150 million it has been getting since 2009.”

The Democratic Party of Virginia released a statement Friday stating the fact that it is odd that Comstock is now supporting the Silver Line after voted against the line when she was in the Virginia General Assembly representing McLean.

“If Barbara Comstock had her way, the Silver Line would have never been funded in the first place,” said Del. Ken Plum (D-Reston). “Our bipartisan transportation plan, which I’m proud of supporting, passed without Comstock’s vote. To show up for a photo op having done nothing but oppose the Silver Line is misleading.”