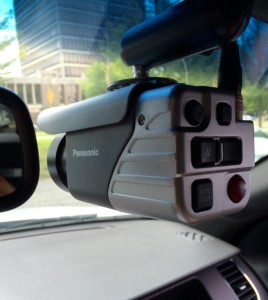 The Fairfax County Police Department has formalized its guidelines for the agency’s in-car video program.

Some 650 police cruisers spread across FCPD’s eight stations are equipped with in-car video, which has proven to be valuable in reviewing what transpired at a traffic stop or crime scene, police spokesman Lucy Caldwell said.

The cameras were phased into most cars between 2013 and 2014, she added. FCPD is going to explore a pilot program with bodycams later this year, she added.

Footage goes to a DVR mounted in the trunk.

Some of the new guidelines have to do with how long the footage is stored.

According to the department’s General Order 430.8, In-Car Video Program:

Video/audio recordings not required to support known investigations or litigations: retain for 30 days after recording, then delete.

Video/audio not falling into either of the above categories:

Under the new guidelines, officers are required to activate the cameras at all traffic stops, vehicular pursuits, emergency situations when they are called as backup and prisoner transport.