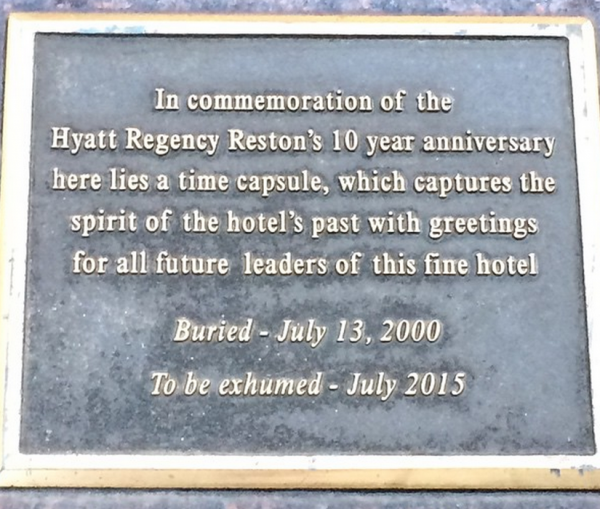 Fifteen years ago today, a time capsule was buried at the Hyatt Regency Reston, with instructions to leave it sealed until July 2015.

However, Dustin Imbesi, the Hyatt’s Director Sales, Marketing and Events, says the capsule won’t be opened this month, simply because there is too much happening.

The time capsule, located in a grassy spot near the hotel’s main entrance, was placed to capture “the spirit of the hotel’s past” when the Hyatt celebrated its 10th year in Reston in 2000.

Now the hotel is gearing up for its 25th anniversary, and the capsule will be opened later this year as part of that celebration, said Imbesi.

“We have a good idea of what is in there,” he said. “We decided we did not have to open it at the exact time it said on the stone. We’ve has a lot happening with the World Police & Fire Games here this month.”

Across the way in President’s Park there is another time capsule. That one — with instructions not to open until 2030 — was placed in October of 2010, as Reston Town Center marked its 20th anniversary.