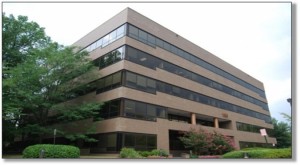 The owners of a five-story office building at 1950 Roland Clarke Place are considering selling the property as mixed-use development is planned all around it.

The Washington Business Journal reports that Reston-based intellectual property law firm Greenblum and Bernstein, which occupies much of the space in the building it purchased for $11.5 million in 2002, is seeking to sell the space, as well as an additional building it owns 1941 Roland Clarke Place.

The buildings, about 102,000 square feet over 6.5 acres, are located next to The JBG Companies’ Reston Heights, where work on the second phase of a large mixed-use development is slated to begin soon. The last remaining commercial tenants on the stretch of Sunrise Valley have vacated the premises and construction should begin soon, JBG reps said.

The Roland Clarke office buildings are also adjacent to the former American Press Institute building, which has been vacant for more than three years. The owners of the Brutalist office building recently filed a rezoning application to change from industrial to residential and build 37 houses on the land.

And across the street from Roland Clarke Place is Reston National Golf Course, which has been embroiled in its own rezoning fight for several years.

The Fairfax County Board of Zoning appeals ruled in April that the 166-acre course could be redeveloped from a open and recreational space to residential without a comprehensive plan amendment. Several community groups — including Rescue Reston, Reston Association and Fairfax County, are challenging that decision in circuit court this fall.

The firm has been approached by developers in the past, and co-managing partner Neil Greenblum told the WBJ it decided to explore a possible sale now given the increased development in the Reston area.