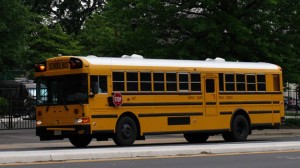 The 2015-16 school year gets underway Tuesday morning in Reston and the rest of Fairfax County.

It’s the first day of the new bell schedules for high schoolers. After studying and discussing the topic for several years, the Fairfax County School board voted to make the switch beginning in 2015-16.

The School Board made the switch citing research from the American Academy of Pediatrics. The research showed school schedules should be aligned with the biological sleep rhythms of adolescents in order to improve their mental and physical health and academic performance.

Most Fairfax County high schools will now start at 8:10 a.m. (formerly 7:20 a.m.) and end the school day at 2:55 p.m. Middle schools will now begin at 7:30 a.m. Most elementary schools have been only slightly adjusted.

In Reston, students at Sunrise Valley and Terraset Elementary schools will return to vastly renovated classrooms. Both schools have been in the midst of major renovations for more than a year. The projects are expected to be finished later this school year.

Student at Forest Edge Elementary will have a new principal, Leona Smith-Vance.

Two new science-and-tech-based private schools, Ideaventions Academy and School for Tomorrow, are also opening in Reston for the 2015-16 school year.

And even though the 2015-16 school year is just beginning, FCPS is in the midst of gaining community feedback for the 2017 budget. FCPS Superintendent Karen Garza says the system may face a deficit of $100 million if cuts are not made. The board is considering everything from cutting certain sports and arts programs to eliminating staff positions to cut costs.

Beginning Wednesday, community members will be able to submit specific proposals for how to balance the budget using a “Budget Proposal Tool” available at www.fcps.edu/SaveFCPS. The proposals submitted via the Budget Proposal Tool will be shared with the Budget Task Force for their review prior to making a recommendation to the Superintendent in October. The information will also be shared with the Superintendent and School Board.

There will also be a community meeting on the budget Wednesday at South Lakes High School, 7 p.m.