What would you do if you were in charge of closing a projected $80 million deficit for Fairfax County Public Schools?

FCPS is inviting citizens to log into a its new budget proposal tool, which went live on Wednesday. Citizens can slash and protect programs and positions in a scenario that looks at a $50 million deficit for FCPS or a $75 million deficit. FCPS Superintendent Karen Garza says all suggestions will go to the Budget Task Force.

The budget software was used by Arlington Public Schools and given to FCPS for free, school board At-Large member Ryan McElveen said.

What seems like a number-focused video game is quite real, however. Garza came to South Lakes High School Wednesday night for a community meeting about the projected shortfall for the 2017 Fiscal Year, how the budget gap happened — though it is down from a projected $100 million — and why citizens need to take it seriously. 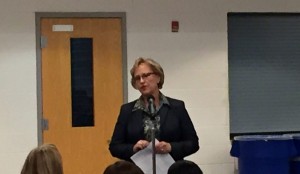 “We have cut almost a half-billion since 2008,” said Garza. “2017 is likely to be one of our most challenging budget years yet. There are going to be very, very difficult decisions to make.”

The FCPS Budget Task Force spent the summer looking at all possibilities — from increasing class size (which has already happened three times in recent years) to charging for AP/IB tests and sports participation to reducing athletic and arts programs to going to a six-period (instead of seven) high school day.

Even all-day kindergarten, which was a gradually implemented and hard-fought addition for FCPS in recent years, is on the task force menu. Going back to half days would save $39 million.

There was no discussion about specific program cuts on Wednesday. There will be a series of town hall-type meetings later this fall, said Garza.

The Superintendent says most of the gap is “out of our control.” Increasing enrollment, increasing need for special programs such as English as a Second Language, increased health care costs, raises for staff and contributions to the state retirement fund are among the top cost drivers, she said.

FCPS gets about 70 percent of its $2.6 billion (2016) budget from the Fairfax County Board of Supervisors, who has said to expect about a 3 percent increase for 2017, said Garza.  Without knowing the state contributions or other exact funding numbers, the county deficit alone will be about $55 million, she said.

For 2017, FCPS would like to give incremental step raises and a 1.5 percent cost-of-living raise to teachers. The school system will likely increase by 2,300 students, said Garza.

Hunter Mill School Board Member Pat Hynes, who serves as school board chair, says everyone should take the shortfall seriously.

“We are now looking at a projected $80 million gap,” she said. “But I cannot support another budget that freezes pay or increases class size. It is early in the process, but we need to know what the shortfall will be and how to make it up. We are taking a lot guesses on the state and Board of Supervisors contributions.”

South Lakes PTSA President Andy Sigle said he thinks the revenue side of FCPS should get together with the spending side much earlier in the process.

For parents and students in attendance at Wednesday’s meetings, things are much more personal. There were band parents, sports parents, IB Diploma candidates listening and gearing up for a fight to surely come this fall.

Jenna Day has four kids in the Oakton pyramid who are in music programs. She was at the meeting wearing an “All About Strings” T-shirt (she also owns a violin store in Chantilly).

“Creativity in our children is going down the tubes,” she said. “It is so important for children in middle school and high school to have a peer group. Not every kid is athletic. To be honest, if they cut music programs I will probably homeschool my children.”