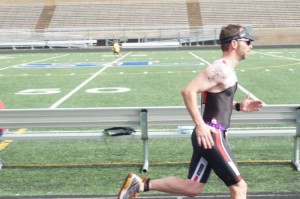 Born 1984, when triathlons were a relatively new pursuit, the race has grown up along with Reston.

Today’s field includes close to 600 participants and depends on hundreds of volunteers to make it run smoothly.

The race begins at 7 a.m. at Lake Audubon and ends at South Lakes High School. The first finishers will start coming in about 9 a.m. Athletes swim 1,500 meters in Lake Audubon, bike 40K on Reston roads and then run a 10K, mostly on Reston Association paths and the SLHS track.

There will be no parking at Lake Audubon on race day. Race officials say any vehicles parked on Twin Branches near the Lake Audubon Pool will be towed. The best plan for racers is drive to and park at South Lakes High School/Langston Hughes Middle School and drop off  bike/run transition gear at South Lakes High School and ride your bike to the lake. All athletes should plan to be at the lake and ready to swim no later than 6:30 a.m.

Sunday’s forecast calls for partly cloudy skies and a high of 70. It may be much cooler at sunrise when swimmers enter the lake.