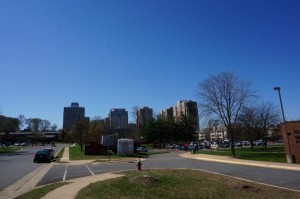 What county services should be offered at Reston Town Center North?

That will be the subject of a community meeting hosted by Hunter Mill Supervisor Cathy Hudgins on Sept. 19 (9 a.m. to 1 p.m. at Reston Community Center Lake Anne).

The county issued a Request for Proposals (RFP) this summer for the first phase of redevelopment. The RFP application deadline was Aug. 20. The county has not announced the next step in the process or who was chosen for the project.

The county eventually envisions a mixed-use district, with renovated or relocated space for the library and shelter, as well as offices, hotels, a performing arts center and at least 1,000 new residences.

The Fairfax County Park Authority also plans to build an indoor pool and recreation center at Town Center North. Park Authority Board Chair Bill Bouie said earlier this year the recreation center would primarily be funded with bonds, including an $87.7 million bond in 2016 and an $88 million bond on the ballot in 2020. He said the park authority would seek developer proffers to help pay for the facility. Typical proffers are around $800 per residential unit, he said.

Fairfax County Deputy Executive Rob Stalzer and Andrew Miller, Project Coordinator of the Public-Public Private Partnership Branch will discuss the county and Inova’s (which owns some of the land) general plans, including the (RFP process and potential development scenarios that may be considered for Town Center North.

The county envisions a mixed-use district, with renovated or relocated space for the Reston Regional Library and Embry Rucker Community Shelter, as well as offices, hotels, a performing arts center and at least 1,000 new residences.

“Participants have the opportunity to identify critical needs that should be addressed in the redevelopment of the County owned property, as well as the larger site,” Hudgins said in a statement. “It is important to continue the conversation on how best to maintain a vibrant and livable community for all.”