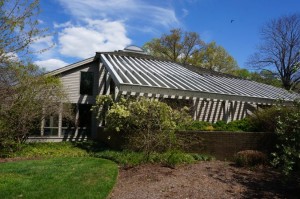 Reston Association has selected a panel to serve as the Tetra working group as it looks towards future uses for the 3.47-acre property in North Reston.

RA closed in July on its $2.65-million purchase of the former Reston Visitors Center. RA members narrowly approved the purchase in a referendum in May. The referendum capped a busy few months of community discussion, debate and opposition to the purchase.

The acquisition gives the association 98 acres of contiguous space at Brown’s Chapel Park and Lake Newport Tennis. During community meetings, RA said it expects to use the space for events and rentals, after-camp care, a conference center, among other suggestions. It also forecasts earning revenue of more than $100,000 annually in rentals for events and groups.

RA also plans a park at the site, which sits on the shore of Lake Newport.

Renovations have begun on the 32-year-old building, and RA CEO Cate Fulkerson says the association hopes to put it to use by Spring 2016. Lauer Commercial (formerly Tetra Partners), owners of the building since 2003, is renting the space as offices through the end of 2015.

Fulkerson said previously there will be no impact to the RA assessments until “2018 at the earliest.”