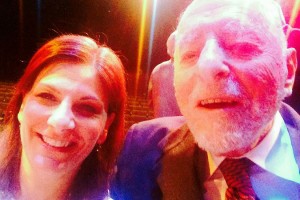 When I first met Robert E. Simon, who died Monday at age 101, I was quite intimidated.

I had lived in Reston for 13 years by that time, and of course had heard the legend of Mr. Simon. With his Pete Seeger-style fisherman’s cap and his white goatee, he was a popular yet nearly mythical figure around town.

I had just left my longtime newspaper job and gone to work for AOL, which was starting a network of hyperlocal news sites. As the founder of Reston Patch, it was on me to know all things Reston. Starting with Mr. Simon.

We met at the Lake Anne Coffee House that day in spring 2010. I brought my friend Justine with me because I was kind of scared. We talked about all those things Reston — what he liked, what he didn’t like, whether it turned out the way he planned. He admonished me when I called the Reston Association trail crossings tunnels.

“They are underpasses!” he said, thumping his cane on the ground.

OK, underpasses it is. I never made that mistake again.

Over the years, I came to consider Mr. Simon — I still called him Mr. Simon even though he would constantly correct me and say “Please call me Bob” — a friend and the most interesting man in Reston. Maybe Virginia. I’m not going to say in the world. I don’t know everyone in the world.

After watching my parents — young enough to be Bob Simon’s children — slowly die over the last few years, I came to think Simon just might outlive us all. When we first met in 2010, he said one of his regrets was he would not live to see Metro come to Reston. Even with a whole bunch of Silver Line delays, he rode it the first day — and danced on the Reston Station Plaza.

I would sometimes see Bob out several times a week — a Reston Association meeting one night; a reception the next; speaking before the Fairfax County Board of Supervisors one day; then holding court at one his favorite Lake Anne restaurants.

Much like how they used to ID another legend, Joe DiMaggio, as “the greatest living baseball player,” at events in DiMaggio’s later years, Simon was always given a shoutout. He seemed to love the role as elder statesman. He would stand and wave when introduced, perhaps doffing his fisherman’s cap. 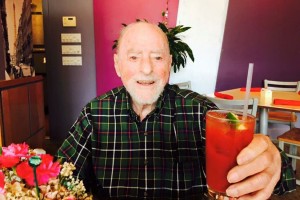 Always with a big smile.

He started using a walker about a year ago. But his mind was as sharp as ever. In June, he stood up and told the RA Board to, let’s use a euphemism, grow a pair.

“For the past several years, Reston has been run by the NIMBYs (“Not In My Backyard”),” Simon said, recalling issues such as a tennis facility at Lake Newport and the more recent bocce court proposed for a pocket park off of South Lakes Drive.

“This is why I am here — to strengthen your resolve, all the way up to the [Fairfax County] Board of Supervisors. A lot of attention is paid to the naysayers. It is a bloody fact when an issue comes up, people in favor stay home and NIMBYS come out to holler. A good NIMBY knows first thing you holler is traffic. It takes sophisticated analysis to know whether it will affect traffic. But that is what they use to terrify the board.”

He called me in early July to set up lunch to make sure I got things right when I wrote about Reston’s history. He penned our lunch date down in his red book. Everything went in the red book.

I met him promptly at noon — we went to the friendly hug hello years ago — in the lobby of Heron House and strolled across Lake Anne Plaza to Cafe Montmartre, one of his hangouts.

“How did you get into this business?” Bob asked me. “How do you make money at Reston Now? How many readers do you have?”

Bob ordered a gin Bloody Mary. It’s noon on a Tuesday and I am not a big drinker, but one does as Mr. Simon does. Make mine with vodka.

We talked about many things, most of which never made it into a story: the deal to put together Reston, his memories of a cousin coming home from World War I (!!), sledding near Riverside Drive in his native New York City, his sisters, and his World War II service procuring recreational supplies for the troops.

We spoke of Carnegie Hall, which Simon sold to put up the money for land that became Reston. I had recently watch a documentary about the artists and dancers that rented rooms and studios in Carnegie Hall for years.

I asked him about that era, now long gone.

“It was an exciting place to be,” said Simon. “The dancers were all pretty girls. Of course I would spend time there.”

Decades later, after developing Reston and all its amenities, his favorite place was 13 stories above Lake Anne. If you asked him the best spot in Reston, he always had this answer: my bed.

He died there peacefully on Monday. Cheers to you, my friend.

Photos: Top – Reston Now editor and Bob Simon take a selfie on his 100th birthday; Bottom – Bloody Marys at our lunch in July.

Karen Goff is the editor of Reston Now.