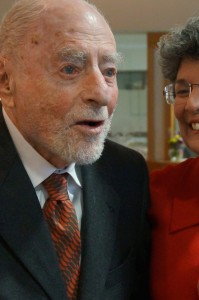 Reston founder Bob Simon told the Reston Association Board last week that they should stop listening to residents who decry traffic, expense and other issues that get in the way of progress here.

“For the past several years, Reston has been run by the NIMBYs (“Not In My Backyard”),” Simon said, recalling issues such as a tennis facility at Lake Newport and the more recent bocce court proposed for a pocket park off of South Lakes Drive.

“This is why I am here — to strengthen your resolve, all the way up to the [Fairfax County] Board of Supervisors,” the 101-year-old founder told the RA Board at its regular meeting. “A lot of attention is paid to the naysayers. It is a bloody fact when an issue comes up, people in favor stay home and NIMBYS come out to holler. A good NIMBY knows first thing you holler is traffic. It takes sophisticated analysis to know whether it will affect traffic. But that is what they use to terrify the board.”

Simon recalled several proposals that he said would have benefitted the community, but which died due to community conflict.

“There were three proposals to cover RA tennis courts,” he said. “In each case, NIMBYS prevailed. There was a proposal for Barton Hill, where they were going to cover the tennis courts and then you climb up the hill to the houses. People brought forth a 13-year-old girl to testify who told us if we covered the tennis courts she would not dare go out of the house.”

Simon said if he had the responsibility of starting bocce here, I would “have had a budget of $127 for the bocce court and would have had two stakes and bunch of balls.”

Bocce was proposed and discussed in 2013 and 2014 and met with neighbor pushback. Neighbors close to Cabots Point, where the courts were planned and approved by the RA Board, said traffic, crowds and a possible increase in crime would happen. They also did not like the way the association and then-South Lakes Director Richard Chew went about notifying residents of the possibility of bocce.

“Bocce is a lot of fun,” said Simon. “Can you imagine the traffic that would be with two old gentlemen throwing balls on the ground?”

Ultimately, after nearly a year of discussion, the board voted to revoke its approval after it determined the cost estimates would be exponentially more than originally forecast.

“I beg of you, when the happens, no matter what there will be NIMBYs there telling don’t do it,” said Simon. “You listened on Bocce. Don’t do that again.”

Simon also spoke out on village centers. He encouraged the directors to look at the future of Reston as plazas surrounded by mixed use, rather than continuing to have strip centers serve as village centers.

The Reston Master Plan amendments recently put planning in place in the event developers want to make over the existing village centers. They will not need a comprehensive plan amendment to make changes.

Simon originally planned Reston’s village centers to resemble Lake Anne Village Center. But by the time the subsequent village center’s were built, Simon was no longer involved in the project and Hunters Woods, South Lakes, North Point and Tall Oaks were built in a more traditional, suburban manner.