This is a sponsored post by Elizabeth Arguelles, veterinarian and owner of Just Cats Clinic at Lake Anne Plaza. It does not represent the opinion of Reston Now. 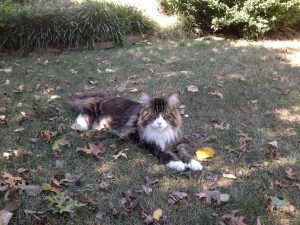 Known for its intelligence and playful personality, the Maine Coon has become one of the most popular breeds of cat in America. They are considered the largest domesticated felines, growing up to 40 inches in length and weighing as much as 35 pounds.

Maine Coons are also renowned for their beauty.

Their silky flowing coats and long, bushy tails give them an elegant and regal look.

In this article, we will talk about some of the other things that distinguish Maine Coons as a breed. This is the first in a series of articles in which we will discuss a variety of cat breeds. 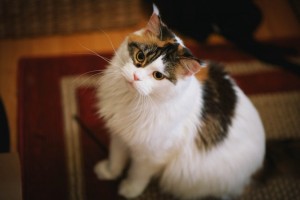 In addition their size and fur, Maine Coons are marked by several other physical characteristics. Though technically either longhaired or medium-haired, Maine Coons generally have longer fur than other breeds. Their fur is shorter on the head and shoulders and longer on the stomach and flanks. Some Maine Coons have a ruff around their necks that resembles a lion’s mane.

The most distinctive features, however, are beautiful ear tufts and fur growing between the toes. The latter is thought to have evolved to allow Maine Coons to walk in the snow.

Interestingly, Maine Coons can have the colors associated with any other breed of cat.

Where do Maine Coons come from?

From Maine, of course! Unsurprisingly, the Maine Coon is the official cat of the state that gave it its name.

The breed’s origins before arriving in New England are much murkier. The most generally accepted theory is that the Maine Coon is descended from a cross between indigenous shorthaired domestic cats and longhaired breeds that arrived in the New World with English travelers.

What kind of personality does a Maine Coon have?

As was mentioned above, Maine Coons are gentle and friendly, making the “gentle giant” nickname especially fitting. These cats are also intelligent and playful, reminding many of dogs. They are a great fit for owners with children, multiple cats and other types of pets.

Maine Coons tend to be very good with people. Though not lap cats but they do want to be around people and will “hang out” with their human families. Maine Coons are also very “chatty,” frequently yowling, chattering, chirping or “talking” to their owners.

One of the Maine Coon’s most interesting personality traits is its fascination with water. While most cats are either mistrustful or afraid of water, Maine Coons enjoy splashing around or playing in it. It is believed that this is a legacy of their ancestors who crossed the ocean on ships.

What health issues do Maine Coons have?

Maine Coons are generally a healthy and hardy breed that has adapted to surviving in harsh weather conditions. But like other purebred cats, they are still susceptible to particular congenital health issues. These include but are not limited to feline hypertrophic cardiomyopathy (HCM), spinal muscular atrophy (SMA) and hip dysplasia.

HCM: HCM is thought to be inherited as an autosomal dominant trait in Maine Coons. It affects male Maine Coons more often than females, and middle-aged to older cats more than younger ones. HCM is a progressive disease that can result in heart failure. Fortunately, it is possible to test for the specific mutation associated with this disease. So if you have a Maine Coon, it is a good idea to consult your veterinarian about testing services.

SMA: This inherited disease causes the deterioration of the spinal cord neurons that activate the skeletal muscles. The symptoms are normally seen within the first three to four months of age and can result in muscle atrophy in young Maine Coons. As with HCM, there is testing available to detect the genes that cause SMA.

Hip dysplasia: This is an abnormality of the hip joint, which can cause pain, lameness and arthritis. It typically affects older cats and larger cats (like Maine Coons) that bear more weight on their frame.

Testing can help identify your Maine Coon’s risk factors so if you are thinking of adopting one of these “gentle giants,” be sure to talk with your vet first.