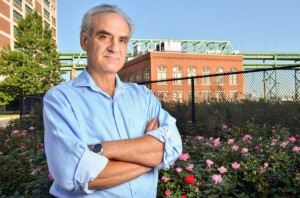 Gary Cohen, founder of Reston-based Health Care Without Harm, is among 24 people named as a 2015 MacArthur Foundation Fellow.

The fellows will receive what is commonly known as a “genius grant” — a $625,000 grant to aid their work.

Cohen, who is lives in Boston but commutes to Reston, is a “social entrepreneur and activist spurring environmental responsibility in health care both in the United States and abroad,” says The MacArthur Foundation.

According to the foundation:

American hospitals have historically been major contributors to environmental pollution, largely ignoring the damage to local communities and environments caused by extensive use of harmful chemicals in medical devices, toxic cleaning agents, reliance on fossil fuels, and disposal of waste via incineration.

Cohen has led a paradigm shift in the perceived responsibility of health care providers, from a narrow, patient-centered duty of service regarding individual health to a broader obligation to also “do no harm” to surrounding communities, their residents, and the global environment.

Cohen founded Health Care Without Harm (HCWH) in 1996 to bring attention to the problem and to propose practical, economically viable solutions.

It was HCWH’s attention on the use of mercury, once used in thermometers and other medical devices, that helped lead to its virtual elimination in the United States. a global treaty says mercury will be phased out everywhere by 2020.

HCWH is also credited with playing a leading role in reducing the number of carcinogenic-emitting waste incinerators in the United States from 5,600 in the late 1990s to fewer than 70 in 2006.

Cohen is also the founder or co-founder of other organizations aimed at similar environmental results, including the Healthy Hospitals Initiative, a data-driven platform that guides hospitals in purchasing safer chemicals and healthy food and implementing energy efficient technologies, and Practice Greenhealth, a U.S.­-based membership organization for hospital systems to share best practices, information, and tools for environmentally responsible patient safety and care.

Cohen is also a member of the International Advisory Board of the Sambhavna Clinic in Bhopal, India, which provides free medical care to the survivors of the Union Carbide gas disaster in Bhopal.

He was awarded the Champion for Change for Climate Change and Public Health by the White House in 2013.