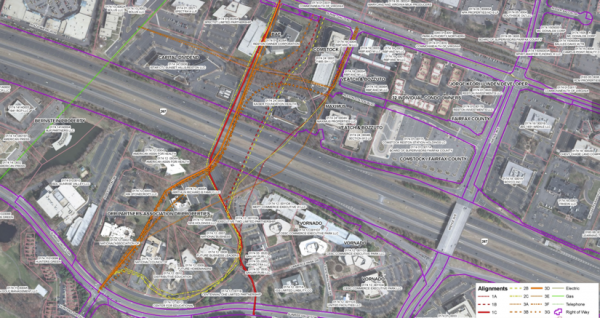 Fairfax County has been examining for years how best to build a Soapstone Drive connection between Sunset Hills Road and Sunrise Valley Drive.

A connector would provide an additional car and pedestrian crossing over the Dulles Toll Road, alleviating some of the traffic on Reston Parkway and Wiehle Avenues. It would also offer an additional way for pedestrians to access the Wiehle-Reston East Metro station.

Fairfax County’s Department of Transportation (FCDOT) will host a public information meeting to give an update on the project on Monday, Oct. 26, at South Lakes High School, 11400 South Lakes Dr.

The meeting takes place from 6-8 p.m., with a short presentation at 7 p.m. Staff will be on hand to discuss the project and answer questions.

Authorities agree that Reston needs the additional crossing. At issue is how to pay for it.

The Soapstone Connector Project was included in the Reston Comprehensive Plan Amendment, which was approved by the Fairfax County Board of Supervisors in February 2014. After studying several options and obtaining community feedback for a crossing, the Supervisors in April of 2014 approved a hybrid design combining elements of two of the options.

Also in 2014, the Board of Supervisors included $2.5 million for the preliminary design of this project as part of its Six Year Transportation Project Priorities. At that time, they also put the project — estimated to cost $91.75 million — on the county’s list of high-priority projects for 2015-20.

An exact price tag won’t be known until the connector is farther along. What could be coming soon are updates estimates, an environmental impact study and preliminary engineering.

Additionally, there would be a four-way intersection with traffic signal at Sunrise Valley, as well as another four-way intersection with no signal, or perhaps a traffic roundabout, on the Sunset Hills side, planners said. Several properties would be affected, as the road will run right though buildings on Association Drive south of the toll road, as well as several buildings on the north side.