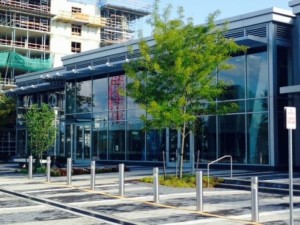 Comstock, which announced on Thursday that Founding Farmers will open at Reston Station in 2016, is also planning a pop-up retail project called Urban Pop on the Reston Station Plaza.

Urban Pop will host retail and food vendors in some of the areas of the plaza that are currently fenced off, said Comstock spokeswoman Maggie Parker. The construction fencing will come down to expand the plaza enough for outdoor retail space.

The market concept is similar, but smaller in scale, to The Stock Market @ Reston Station that Comstock discussed last year, said Parker. That plan was shelved a few months ago.

Parker said Urban Pop will bring a curated mix of shops and artisans to “that would be of benefit to commuters,” said Parker.

No vendors have been signed yet, but Comstock plans to have the project open in Spring 2016. Founding Farmers will likely open in late 2016, Farmers Restaurant Group said Thursday.

Meanwhile, look for Smartmarkets, which operates the Wednesday farmers market on the plaza, to return in 2016. The market, which had space at two locations off Sunrise Valley at Reston Parkway the last five years, moved to Reston Station last spring. Parker said Comstock and the farmers were both pleased with the plaza location in 2015.

The vendors will be on the plaza Wednesdays from 3 to 6 p.m. through November, said Parker.