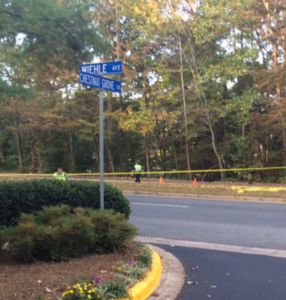 Police are still investigating the crash that occurred at 6:25 a.m. on Wiehle southbound near Chestnut Grove Square.

At this point, they say a 30-year-old Sterling-area man was driving a 2005 Honda Accord south on Wiehle toward the Metro station around 6:25 a.m. when he drove past the entrance of the Chestnut Grove community complex.

At the same time and location, Corella Erazo was crossing Wiehle Avenue on foot, from east to west. She was able to cross the northbound lanes of traffic and part of the southbound lanes before she was struck by the right, front portion of the Accord.

This crash investigation is ongoing, and neither speed nor alcohol appear to be factors in the crash, police said. There are no crosswalks at this location.

The victim was transported to Reston Hospital Center with life-threatening injuries and died a short time later.

Anyone with information is asked to contact Crime Solvers electronically by visiting www.fairfaxcrimesolvers.org or text-a-tip by texting “TIP187” plus your message to CRIMES(274637)** or by calling 1-866-411-TIPS(8477).