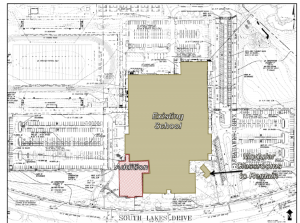 Fairfax County Public Schools can proceed with the 40,000-square-foot addition at South Lakes High School, the county Board of Supervisors ruled on Tuesday.

The proposed addition will bring SLHS’ capacity to 2,500 students. That capacity appears to be needed though as current enrollment is 2,446 in a school designed for about 2,100 students.

The addition comes less than 10 years after SLHS underwent a major renovation that increased capacity by about 1,000 students.

The addition will enable the school to get rid of many of the temporary classrooms that have been added to the property in the last several years to handle overcrowding as school population, reflecting an overall trend in FCPS, has continued to grow annually.

If the trend holds, SLHS may be close to 2,900 in the next several years, FCPS officials said in the most recent FCPS Capital Improvement Plan.

The South Lakes addition will be paid for from a 2013 school bond.

A county planning staff report details what will be constructed, including Also planned: 128 new parking spaces and additional stormwater management.

The stormwater management has been a point of contention among some nearby residents. Homeowners on Wakerobin and Cedar Cove, located across the street and downhill from the school, have voiced concerns to the county about erosion as the water flows downhill towards Lake Audubon.

“There is absolutely no doubt that the classroom space that the School Board seeks is needed,” Reston 2020’s Terry Maynard testified to the board Tuesday. “What is not needed, however, is the added destruction of neighboring private properties from the increased stormwater runoff the project will create, and ultimately the added pollution of the Chesapeake Bay.”

Maynard says he is concerned that FPCS only has to meet outdated stormwater management guidelines.

“The stream from South Lakes High School’s property has turned a once-smooth ravine floor with lush plant life into a 3-6 foot deep, 6-10 foot wide gash that floods out of its banks with each major storm along its 1,000-foot length and 30-foot drop.”

Maynard urged the board to defer its decision.