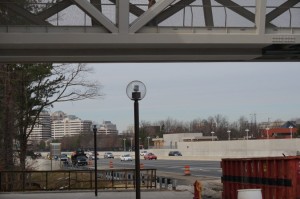 Now that Metro has come to Reston, the biggest challenge is getting pedestrians, cyclists and drivers easily connected with public transportation.

That was the theme of a legislative forum sponsored by the Greater Reston Chamber of Commerce at Reston Station on Wednesday.

Officials at the state, county and Reston level gave their thoughts on moving Reston forward as it becomes a transit-oriented community.

However, issues, even temporary ones such as a crash, affect the region overall, said Marty Nohe, chairman of the Northern Virginia Transportation Authority.

“There is no such thing as a Reston or Fairfax transportation problem,” he said. “At 5:15 p.m., a small fender bender in Prince William County can cause delays in Arlington. … Congestion relief is a top priority.”

Nohe said the NVTA has gotten nearly a half-billion dollars in new projects approved for Northern Virginia in the last three years.

At the county level, some of the most critical future projects include new crossings for the Dulles Toll Road; widening the Fairfax County Parkway; and implementing bus service to link this part of the county with the Springfield area, said Tom Biesiadny, director of the Fairfax County Department of Transportation.

Biesiadny also said the following are of high importance: bicycle and pedestrian improvements, walkways and sidewalks on such roads as Fox Mill, Glade, North Shore, Soapstone, Sunrise Valley and Sunset Hills; and a bike/pedestrian overpass at the W&OD Trail at Wiehle and Sunset Hills.

He said the latter is currently moving forward with a design plan. Meanwhile, there will be an update on the Soapstone crossing of the Dulles Toll Road at a community meeting Monday evening at South Lakes High School.

“The Reston Comprehensive Plan, approved in 2014, includes significant enhancements in transportation,” he said. “That includes four toll road crossing areas and mixed-use development [around the Metro stations] and a grid of streets around the stations.”

Reston Association CEO Cate Fulkerson says RA is placing a high priority on “what we need to do to address connectivity” for pedestrians and cyclists using RA paths and roads.

Comstock Partners spokeswoman Maggie Parker said developers need to work together with government and RA to reach those goals.

“We need to pay attention to development, enhance the urban grid and not put impediments into that process,” she said.

“An impediment would be not having all the people at the table when talking elements that need to go in.”