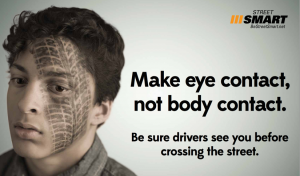 Fairfax County Police are initiating a public awareness campaign to get pedestrians, cyclists and drivers to follow safety rules.

The Street Smart initiative begins tomorrow, and police hope it will cut down on behaviors that contribute to accidents. That includes not crossing in a crosswalk or intersection; pedestrians unlawfully using the roadway for travel where sidewalks are available; distracted driving; failure to yield to pedestrians in a crosswalk; reckless driving; driving while intoxicated; and speeding.

“Many of these crashes are preventable,” Capt. Michael Grinnan, Commander of FCPD’s Traffic Division. “By utilizing sidewalks for travel, crossing at a marked crosswalk or a controlled intersection, pedestrians could potentially help us to reduce the number of pedestrian-related crashes by as much as 40 percent. By focusing on distraction-free driving and being alert for pedestrians and bicyclists, motorists could potentially help us to reduce that number by approximately the same percentage.”

Reston had a pedestrian traffic fatality last week. Silvia Raquel Corella Erazo, 72, of Reston, was crossing Wiehle Avenue at Chestnut Grove, where there is not a crosswalk or light, before sunrise last Wednesday when she was hit by the driver of a Honda. She later died at Reston Hospital Center.

The driver of the Honda, a 30-year-old man, will not be charged, police said.

Figures published by National Highway Traffic Safety Administration, reflect 4,735 pedestrians were killed in traffic crashes in 2013.  In Fairfax County, there have been over 400 pedestrian-related crashes since 2012, police said.

FCPD says October is the leading month for pedestrian-involved incidents in Fairfax County.

“With the arrival of autumn and milder temperatures,  we typically see an increase in the number of people out walking, bicycling, or jogging,” Grinnan said. “With shorter periods of daylight now,  motorists, pedestrians, and bicyclists need to be more cognizant of each other and share the road.”

The initiative also aims to identify engineering improvements that could potentially make pedestrian travel safer, police said. Police will be on the lookout for improvements to be made, such as whether crosswalks need to be repainted or areas where lighting needs to be improved.

No word on whether notoriously unlit Reston — which got special mention by police from Reston District Station at a May community meeting at Reston Community Center Hunters Woods — will get improved lighting as a result.