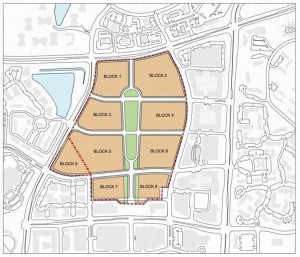 Reston citizens will have another chance to weigh in on the future of Reston Town Center North at a community meeting Nov. 4, 7:30 p.m. at  South Lakes High School.

The meeting is a continuation of the conversation on Sept. 19, where county officials discussed the community’s needs regarding Embry Rucker Community Shelter, Reston Regional Library and the North County Human Services Building, which houses mental and social services.

In late September, the Fairfax County Board of Supervisors approved a land swap between the Fairfax County and Inova. The swap will help the county organize the 49-acre site better in order for it to be rezoned and redeveloped in parcels.

First up: Parcels 7 and 8 (see attached map), which houses Embry Rucker and the library. Both are aging and in need of expansion, officials said at previous meetings. A Request for Proposals for those facilities was put out to developers several months ago. The county has not yet released the results.

Fairfax County voters approved $10 million in funding for the new library as part of a 2012 bond issue.

Citizens attending the September meeting spoke up about adding a nursing home to replace Cameron Glen Care Center, which closed in 2014. Many also wanted to make sure the library got proper attention — and that citizens would not be shortchanged if the library was temporarily relocated during construction.

The redevelopment of all parcels will take up to 10 years, Andrew Miller, Project Coordinator of the Public-Private Partnerships Branch of the Fairfax County Department of Public Works and Environmental Services, said at a previous meeting.

The Town Center North project also includes the county’s acquisition of Reston Towne Green, a five-acre parcel from the Fairfax County Park Authority. In exchange, the park authority has rights to build a 90,000-square-foot recreation center in RTC North. It also ensures that Reston Town Center North will have a 2.6-acre public park in the center of the development.

Eventually, the proposed redevelopment, which runs from New Dominion Parkway to Bowman Town Drive and Town Center Parkway to Fountain Drive, may also include building residences, a performing arts center, offices, and retail, among other amenities.

Inova owns the parcels with Sunrise Assisted Living, the Emergency Care Center and the former Cameron Glen building. Inova has no immediate plans for redevelopment, a representative said.