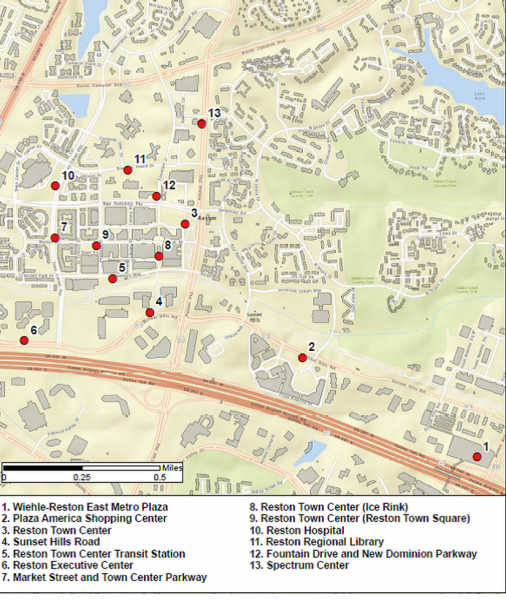 Reston will be getting Fairfax County’s first bikeshare system, and Fairfax County officials expect it to be operational by late 2016 or early 2017.

The tentative plans for an extension of Capital Bikeshare have been in the works for more than a year, since the county completed a feasibility study in spring of 2014. Since then, bicycle program staff as been identifying potential vendors — the plan is to go with Capital Bikeshare, already in place in the District and Arlington — as well as station sites and additional money sources.

Last week, the Fairfax County Board of Supervisors OKed the county’s application for the Virginia Department of Transportation’s FY 2017 Transportation Alternatives Program (TAP) Grant Application. The grant will give the bike program $400,000 as seed money for bike share program. The money will go to pay for needed equipment such as 130 bicycles and 13 stations.

“We consider the TAP grant Fairfax County’s endorsement of the project,” said Fairfax County Bicycle Program Coordinator Adam Lind. “The project is ready to open into the design [process].”

Lind said the program will be seeking additional local funding, as well as sponsorship as the total estimated cost of system is close to $800,000. Federal funds can only be used for equipment and stations, not for operational costs, said Lind.

Lind was in Reston Thursday night to show bikeshare timelines, stations and take feedback from citizens.

The system will start in Reston, with the goal of eventually expanding to Tysons Corner, Herndon  and Merrifield.

The design will not have to go through Reston Association’s Design Review Board as no stations are on RA land.

The next steps will be land acquisition, completing the design plan, and finalizing funding. Different sites have different challenges, such as whether they are on private property (i.e., Reston Town Center, Reston Hospital) or public land, and whether there is already a hard surface in place or one needs to be constructed.

Bikeshare stations can be moved, said Lind. For example, if a station is built at Restion Regional Library, which may get a new facility in a slightly different location in the future, the station can be moved near the new building.

The tentative timeline calls for opening in late 2016 or early 2017. Lind stressed that that estimate is rough as federal funding requires additional steps that could slow the down the process. Also, the he prefers the system open “when people are active and outside,” so the system likely would not open in deep winter.

All Reston stations are located north of the Dulles Toll Road (see graphic). Lind says the county looked into stations at various office buildings in south Reston, but decided the locations would throw off the balance of bikes throughout the day.

“People would ride to work on the south side and there would not be any constant flow,” he said. “Bikes would just sit by the workplaces all day.”

While Reston has 55 miles of Reston Association trails, the W & OD Trail and many bike lanes, one citizen in attendance questioned whether the community is bike-friendly enough to be safe for bikeshare riders, He pointed out that bikeshare riders are often occasional cyclists rather than experienced riders.

“Are you going to throw a bunch of bikes into places where there are a lot of cars?” he asked. “All of those driveways are going to be key places where bikes and cars can meet.”

Lind pointed out that Fairfax County plans additional bike improvements (lanes, signage) countywide, as well as an awareness and safety campaign prior to the system opening.

“One of the benefits of bikeshare is it does get people used to using biking as a transportation alternative,” said Lind.