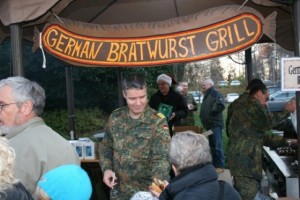 Want to feel like you are celebrating the holidays in Bavaria without traveling far?

Each year, the German Armed Forces, which has an office in Reston (where you can also see a piece of the Berlin Wall on display), turns over the parking lot the office building at 11150 Sunrise Valley Dr. into a traditional German outdoor Christmas fair.

The festival, which runs from 4 to 9 p.m., is fun for the whole family. There are games, crafts to purchase, entertainment and traditional German food and beer.

The event is free, but some of the food, beer and merchandise costs money. Proceeds from the event benefit local charities.

The event is outdoors and happens rain or shine, so dress appropriately.