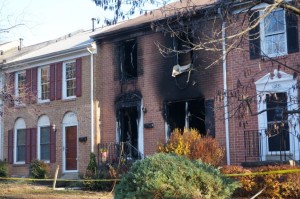 Fairfax County Fire and Rescue officials are still trying to determine the cause of the two-alarm fire at 11853 St. Trinains Court early Friday.

Fire and Rescue spokesman Dan Schmidt said the townhouse has been declared total loss, but investigators have not yet determined how the fire started.

Fire and Rescue crews were called to the townhouse in the Deepwood neighborhood shortly after 3 a.m. on Friday. About 60 firefighters went into action to put out the blaze.

A woman, the only person in the home at the time, self-evacuated from the fire. She was flown to Washington Hospital Center’s burn unit, where she remains.