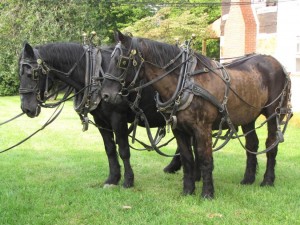 There are a couple of empty horse stalls at Herndon’s Frying Pan Farm Park.

The duo of Jesse and Michael were a popular park attraction, often found pulling wagon rides and other antique farm equipment for demonstration purposes or just letting young visitors pat their noses.

The nonprofit Friends of Frying Pan Farm Park is dedicating its year-end fundraising campaign to bring new horses to the park.

“Their senior years were spent greeting visitors from their stalls and enjoying the park’s lush pastures. It’s a good thing big horses have big hearts, because they had so much love to give and so many who loved them.”

Pitzer said donations will help us bring “gentle giants” back to Frying Pan Farm Park so that future visitors can also have this special bond with horses.

“Funds from this year’s Annual Appeal will go toward research and acquisition of a new team, training, care and other farm operations,” he wrote. “Your donations are not only a gift to the park, but also to the entire community the park has served over many generations.”

Donations can be made online. Any amount is welcome, but Friends of Frying Pan Farm Park also has suggestions for specific help, such as $6,000 for the purchase of a new draft team, $125 for a month of hay to feed the horses, or $400 for an annual vet checkup.