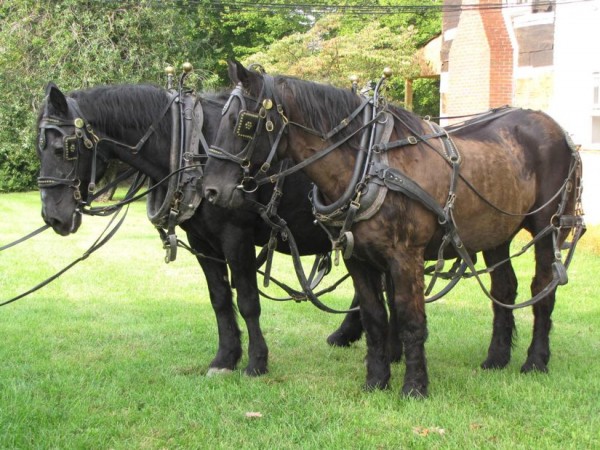 Employees and regular visitors of Herndon’s Frying Pan Park are mourning the loss of Percheron draft horse Jesse, a popular park attraction who died this week at age 35.

For years, Jesse was a part of the duo known by park visitors as Jesse and Michael. Jesse’s horse friend and work buddy Michael died in September 2013 at age 34.

At Frying Pan, Jesse and Michael could usually be found pulling wagon rides and other antique farm equipment for demonstration purposes. When not working, they would be grazing in pastures with the other farm animals, or standing in their stalls waiting for the next child to be helped up by their parent to pet the strong horses’s soft noses.

“The farm will look a bit vacant for right now without Jesse,” said Todd Brown, a Fairfax County Park Authority operations manager. “Jesse was a wonderful part of Kidwell Farm and will be missed.”

Brown was formerly the site manager for Frying Pan Farm Park. He helped find Jesse and Michael years ago when new draft horses were needed. The park was once home to eight Belgian draft horses, all of whom were related (two aging parents and their offspring).

The park authority says some horses were sold, and the others were not up to the task of working. Eventually, they found new homes too.

So Brown went searching and found Michael and Jesse. Brown got a call from the Virginia Horse Association, which told him of two horses in Manassas. In a 2013 Park Authority article, he recalled meeting the two identical horses, who were named after Jesse Jackson and Michael Jackson.

Brown said he was skeptical the pair was ready for the rigors of life at Frying Pan Park — until the rep hitched them to a wagon and they drove down busy Route 234.

“Cars were crossing the horses’ faces at about 60 miles per hour,” Brown recalled. “The horses just stood there. Then a slap of lines on their backs, and the team pulled out onto 234 in a gap between cars. Our mouths looked ready to catch bugs. The horses started trotting and remained under great control. Cars flew by, cars turned, cars passed us. Jesse and Michael could not have cared less. I was sold.”

Jesse and Michael embarked on years of pulling Santa’s sleigh, letting little hands pet their manes, and enjoying the farm demonstrations. They went into semi retirement about five years ago.

“In my 22-year park career, including days at Frying Pan and now at agency headquarters, I have had hundreds of great days,” said Brown. “But the best days are by far the ones spent behind the butts of those gentle giants. … So I thank Michael and Jesse for that and for so much on behalf of thousands who forged their own experiences because of the team.”

“I am proud to say that I was the first person to drive those horses at Frying Pan Farm Park and the last one to have them in harness there. Drive on guys, you will be missed.”

END_OF_DOCUMENT_TOKEN_TO_BE_REPLACED

More Stories
Boston Properties Makes Deal to be Reston Town Center’s Sole OwnerCommute From Herndon Monroe? Then You Need to Read This