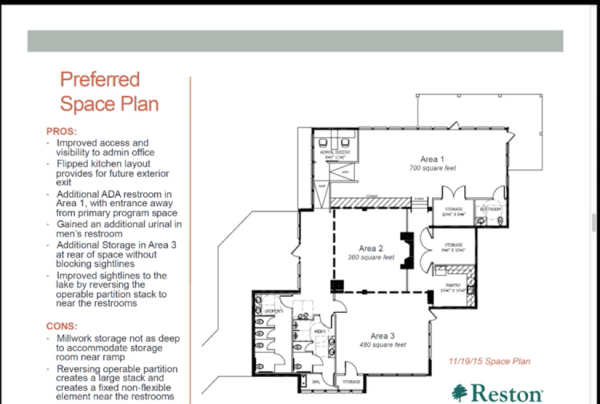 Reston Association’s Tetra Working Group has outlined to the RA Board some of the long- and short-term uses for the lakefront building the association purchased last summer.

First off, the 3,128-square-foot building will be called by a new name: The Lake House. Tetra Partners, the longtime owner of the space, changed its name to Lauer Commercial several months ago. With that name gone, the building, which served as Reston’s Visitor’s Center for 20 years, should also make a change, working group representatives told the RA Board at the Board’s regular monthly meeting on Thursday.

After a controversial discussion process leading to a member referendum in Spring 2015, RA closed on the $2.6 million purchase in July. Buying the building protects the property — which sits next to Brown’s Chapel Park on the banks of Lake Newport — from commercial development, as well as adds a recreational and community space, RA has said.

Art Murphy, an architect who also is in the working group, said interior walls will be removed so the space has a much more open feel with views of the lake. There are plans for flexible partitions so that different groups can use the building at the same time.

There will also have to be expansions of the small bathrooms to accommodate a higher capacity of people, Murphy said.

So what will the people be doing at the building?

Short-term (in the next 12 to 36 months) uses will likely include camp and school aftercare, as well as corporate/nonprofit and homeowners’ association meetings, Creilly said.

The group also said general walk-in hours should be available. It will give residents a quiet place to sit and read indoors or on the deck  — as well as a good sales tool for future use. Open hours would be staffed by volunteer docents, she said.

Long-term plans (by 2020) could include adult classes such as wine tasting or fitness; celebrations such as parties, family reunions or small weddings; and nature programs.

Creilly said the group, which has held six meetings, has heard from neighbors concerned about noise, and the group is still discussing hours the space would be available for special events with that in mind.

Plans are still in the preliminary phase. The group will make another presentation to the RA Board on Feb. 25. The board will eventually get member comments and vote on usage plans.

At the February RA meeting, the 15-member group will propose concept plans for outdoor use, as well as preserving green space and the feasibility of reducing impervious surfaces (parking) that contribute storm-water runoff.