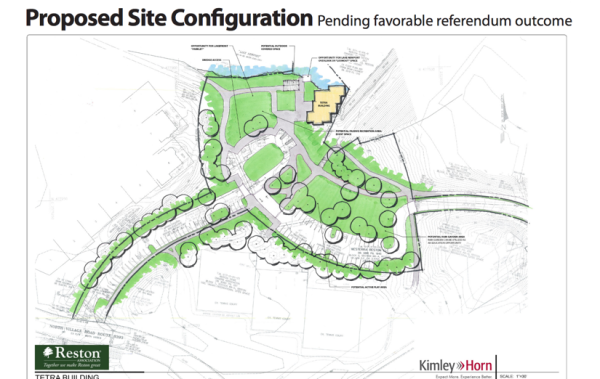 It was standing-room only at Brown’s Chapel on Tuesday night as Reston Association members attended a mostly civil town hall meeting to discuss RA’s plans to purchase the former visitors center property from Tetra Partners for up to $2.65 million.

Members are in the midst of a referendum that will either move the process forward — RA would like to close the deal by late July — or kill it.

The general consensus of those at the meeting seemed to support the idea that purchasing the 3.48-acre property to fend off development, preserve green space and add an RA amenity was a good one — but the price is too high.

The 2015 Fairfax County tax assessment values the property — which features a 3,128-square-foot contemporary building that needs both structural repair and interior renovation — at $1.2 million. RA’s 2015 appraisal says the building, when considered for its highest and best developed use — is worth $2.7 million. 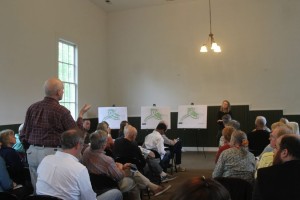 “I applaud you for working on this, but I hope you can negotiate the price.”

RA estimates it will generate $122,000 annually from event rentals, meeting space and after-school and after-camp child care programs. Several in the crowd said they were skeptical that RA would generate that income.

“As a community, we are screwed if RA does not bring in $11,000 a month,” said one member in attendance and asking RA CEO “what is your track record?” when it comes to event rentals.

Said one homeowner: “I would never think about renting space at headquarters, but I consider [the Tetra property] beautiful. I think it is going to be a great thing for RA to generate revenue.”

Fulkerson also presented new renderings of the site as it exists today and what it will look like after RA renovations, including a park area on the banks of Lake Newport, which would be RA’s only lakefront park. Also included: an active play area, covered outdoor space and a lakefront lookout site.

“I like to think of this parcel as the missing puzzle piece in this part of Reston,” said Fulkerson. Acquiring the property, which is in between Lake Newport Tennis and Brown’s Chapel Park, will give RA 98 connected acres of open and community space.

“We have easements, but we cannot do anything with the property [now] was it does not belong to us,” she added.

Other news from the meeting:

RA has secured a loan rate of 3.35 percent, below what it originally estimated, Fulkerson said.

The parking lot currently has about 100 spaces, but may lose 30 of them after RA adds trees and reconfigures the outdoor space.

It will cost about $260-270,000 for interior renovations. That is in addition to the $257,000 of systems repair the recent inspection determined the 33-year-old building needs. RA hopes to negotiate the latter from the price or get the seller, Tetra Partners, to pay for the repairs.

Comstock is the developer behind the previously reported $650,000 developer contribution. If the referendum does not pass, RA will get to keep the money for another purpose, said Fulkerson.

Fulkerson also dispelled the misconception that RA used to own the property. When the building served as the Reston Visitors Center from 1983 to 2003, it was owned by the developers that were building the North Point area. It was then sold to Tetra. RA has never owned the property.

The referendum runs through May 8.