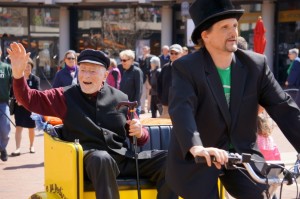 This week, Reston Now will highlight some of the most read-stories of 2015. The No. 3 story was the death of Reston founder Bob Simon.

Even though Robert E. Simon — who envisioned Reston where others saw just muddy pasture in the mid-1960s — was past the century mark, he lived his last years as active as a man half his age.

In any given week, Simon was at development meetings, Reston Association meetings, IPAR receptions. He could be seen on a his daily walk around Lake Anne Plaza or at his usual table at Cafe Montmartre. In May, he even filmed a Geico commercial, doing multiple takes under a blazing hot sun.

That’s why it came as such a shock to many when he died on Sept. 21 at his Heron House condo after a very short illness.

Read the original Reston Now obituary, as well as many other reflections of what the man meant to our community. Among them:

The Bronze Bob turns into a makeshift memorial.

A candlelight memorial for Simon.