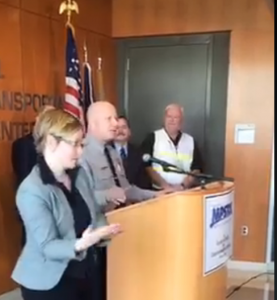 Fairfax County officials say they do not have an explanation about what went wrong on area roads when an inch or so of snow fell during Wednesday night’s rush hour.

People reported being stuck in their cars for hours as they tried to get home. Twenty-minute commutes turned into two-hour ordeals all around the Beltway.

The Virginia Department of Transportation (VDOT), and not the county, is responsible for treating most area roads.

Since VDOT — as well as Northern Virginia residents — have had about five days of preparation and warning about the storm expected to begin Friday afternoon, road treatment should be much more effective than on Wednesday, officials said.

“Do they [VDOT] need to do better? Absolutely,” Fairfax County Board of Supervisors Chair Sharon Bulova said at a press conference Thursday afternoon.

“We did not know what was fully taking place,” she added. “It was a relatively small snowfall but it sure did do a lot of damage.”

Bulova said VDOT was likely so focused on this weekend’s predicted two-foot snowfall that “when a small event happened, they seemed not to be prepared.”

Once the snow began falling, it was already rush hour — and salt trucks would have gotten stuck in the same traffic as the rest of the motorists, Bulova said.

“This weekend, we will be all be joined at the hip [at the county’s command center],” said Bulova. “We are confident we will see a good job from VDOT.”

VDOT said in a release that about About 4,000 trucks will begin reporting at 7 p.m. Thursday to load materials and then stage along interstates, major roads and subdivision streets in northern Virginia.

“For the public safety and the safety of VDOT employees, it will be vital to stay off the roads those two days as the storm comes through,” he said. “Our crews are preparing for heavy accumulation, limited visibility and severe road conditions, and they will need the roads to be clear of traffic to make repeated passes on roads throughout the storm.”

Fairfax County Police Chief Ed Roessler agrees with the advice to stay off the roads.

“If we can stay homebound as best we can till the roads are clear, we will get through,” Roessler said. “It is our mission to get through this safely without any injuries or deaths.”

Officials also asked that the community: